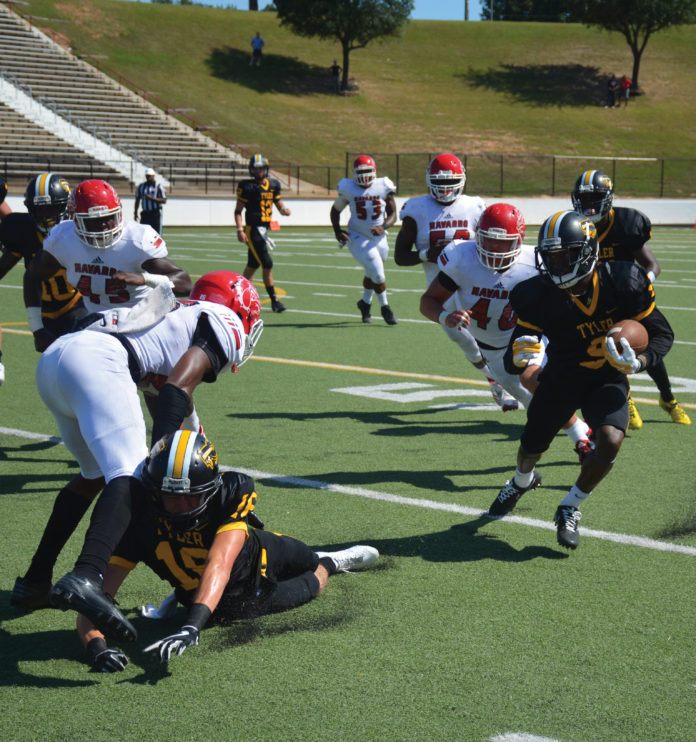 The Apaches took a major shot to their hopes for a post-season bid after taking an upsetting loss to New Mexico Military Broncos on Saturday.

The Broncos scored late in the fourth quarter on a 71-yard punt return by T.J. Williams to get the 17-14 win.

The Apaches had the ball with 2:55 but a screen pass to Terryl Whiley resulted in a turnover when Broncos Deqwunn McCobb stripped the ball away. The loss marks the third consecutive loss for TJC and was the first conference win for New Mexico.

Before the loss to New Mexico Military, TJC was ranked No. 14 in the nation.

Their first loss of the season came when the Apaches were ranked No. 2 in the nation to Navarro on Oct. 7 after blowing a 24- point lead and being kept of the scoreboard in the second half of the game. Their second loss was to Trinity Valley.

There is a three way tie for the fourth seed in playoffs between the Apaches, Navarro and Kilgore.

TJC will host rival Kilgore on their homecoming, Saturday Oct. 28 at 4 p.m., for the

In the first meeting of the two teams this season the Apaches beat Kilgore 22-8 with help from TCU transfer Brennan Wooten.

Kilgore is coming into the game with a 3-3 conference record, 4-4 overall.