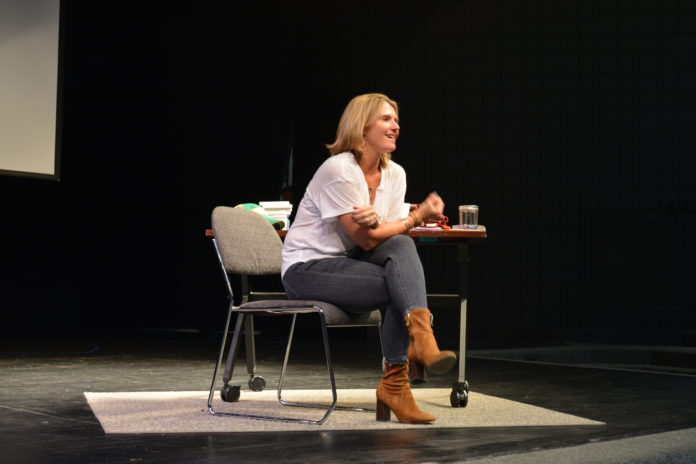 During her presentation, Gilbert gave the students some insight on what she does, her business and journalism background and also answered questions from the students who were present.

“I’m really passionate about young talent. I think it’s going to change the landscape of film and television, and we really want to be a part of that, so I always like talking to students,” said Gilbert.

She showed some samples of her work, including her first documentary, “Tomato Republic,” which is about three young men who are competing for the unpaid position of mayor in Jacksonville, and another documentary, “Until Proven Innocent,” a story about a mother, Hannah Overton, who was convicted of killing her four-year-old son.

Gilbert covered subjects such as how the industry of independent filmmaking is expanding and how she thinks Texas is growing when it comes to film production, directing and acting, claiming that a lot of big talents can be found here.

“I can’t think of a place that has better stories or better characters,” said Gilbert, laughing. “Go to New York and Los Angeles if you want … I don’t think you have to and I would encourage you to stay on what I like to call ‘the third coast.’ Texas is booming.”

Touching on the networking point, she mentioned how important it is to talk to people and make connections.

She also gave some advice on how students can build their career.

Gilbert sets big goals for her company and for herself. Having won the News & Documentary Emmy Award for her work as a producer on CBS News’ “48 Hour” broadcast “Grave Injustice” in 2012, she affirms that she has even bigger plans for the future.

“Emmy needs a boyfriend, his name is Oscar, that’s our goal,” said Gilbert. “We’re not going to stop until we get there.”

Gilbert went to Sam Houston State University where she met Dan Rather, journalist and former anchor for CBS, who helped her take her first steps into her exceptional career.

“I met Dan Rather when I was in college. This legendary journalist came to our school to do an ethics lecture. I was reading his book a couple weeks before he came and I noticed my grandfather’s name in there,” said Gilbert.

She decided to write Rather a letter, and that’s how everything started.

“I wrote him a letter… And probably a week later I got back a ten-page handwritten letter from Dan Rather on CBS News stationary out of New York, and that was the most amazing day,” said Gilbert. “When he came in to speak, I met him and he really took me under his wing and was a mentor, and he still is till this day.”

After meeting her mentor, Gilbert moved to New York and started working for CBS News. Fresh out of college, working in one of the biggest companies in the country with some of the best journalists, she admits feeling a little intimidated at the beginning.

“I was so nervous walking through the doors of CBS News in Manhattan where all these incredible journalists worked for years and felt completely not worthy to be there, but I tried not to let them see that,” said Gilbert.

Although working with experienced people who had been in the field for longer than her, Gilbert claims she had something that made her stand out.

“I certainly was not the smartest person there, by far, but I was probably the hardest worker, and I was just always there,” said Gilbert with enthusiasm. “I got there earliest and I stayed latest, and I just worked really hard.”

After her first six months working for CBS, she had the opportunity to jump on a really important story. She worked her way to cover the Columbine shootings and was determined to do her best. After the first special about the shootings was done, the whole crew left, but Gilbert decided to stay.

“I begged to stay when everyone else left after we did our first special, and they let me stay to help the evening news,” said Gilbert. “They decided we were going to crash another special together that night and I was the only one there for our show, 48 hours, so I got to produce the whole thing.”

After covering and producing a special about the Columbine shootings, the young journalist’s career started to take off.

“I produced this whole special on this massive new story and then I started getting promoted and I just worked my way up from there,” said Gilbert.

She dedicated fifteen years of her life working for CBS News, telling mostly crime stories. After that, Gilbert moved to Houston and soon opened her own public relations company, P+R Productions, which is what she is currently working with.

Her company has a corporate side, where they perform several jobs related to public relations for other companies, and they have what Gilbert likes to call their “passion” side, which is documentaries and film productions. Also, they are currently pitching series and TV shows for national networks. Gilbert appreciates young talent and enthusiasm and is always willing to give young people a chance to show their potential.

For more information go to http://pandrproductions.com/