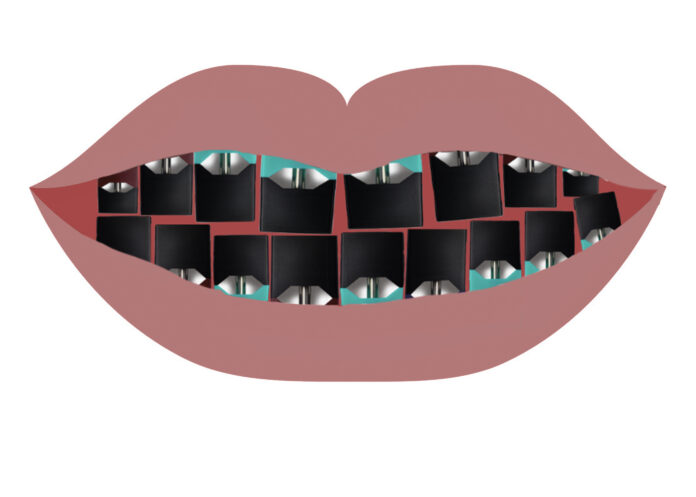 An electric cigarette, or a “vape,” is an electronic smoking device that stimulates tobacco smoking. Due to the price comparison to traditional cigarettes, its variety of flavoring and the idea that it is a healthier alternative, vaping has become popular among younger aged people.

Many hospitalizations, deaths and lung damage have been reported with direct causation of vaping, but what else does vaping have a negative impact on?

One part of the body directly affected by vaping is the mouth.

According to the New York Dental Office, “In many instances, vaping can lead to the need for dental procedures that could otherwise have been avoided with good oral hygiene.”

Diseases, surgeries and permanent oral damage can occur with frequent vaping. One of those diseases is periodontal disease.

Dental hygiene major, Elizabeth Turner said, “Vaping, along with cigarette smoking, causes vasoconstriction. This decreases the blood flow in the mouth which carries nutrients and oxygen, and hides important signs of inflammation.”

Vasoconstriction is the shrinking of small muscles in the walls of blood vessels. When blood vessels are constricted, blood flow is slowed or blocked.  Signs of inflammation are when your gums bleed after being brushed or when they are bright red, and should be reported to the dentist when noticed.

“If vaping hides these signs, people end up coming to the dentist when it is too late to prevent periodontal disease and bone loss,” Turner said. “Nicotine use, vaping included, increases the risk of periodontal disease by 40-50%. These patients also often have heavy deposits and mobile teeth.”

Another effect of vaping is gum recession, which is when your gums are pushed back abnormally. This can be avoided by proper oral care.

“In order to avoid gum recession that can result from constant vaping, it is important to constantly clean gums by using mouthwash and brushing the gums several times a day,” the New York Dental Office said.

Vaping can cause serious and even life-threatening problems that start in the mouth.

“Any kind of smoking or vaping increases the risk for oral cancers in the mouth,” Turner said. “If anything looks out of the normal and lasts for longer than two weeks, it needs to be evaluated by a dentist or oral surgeon.”

One ingredient used in vapes is propylene glycol, known as PG, which breaks down into acid and damages tooth enamel. This ingredient also causes dry mouth that prevents saliva from fighting off diseases and bacteria.

America’s ToothyFairy.com said, “…teens are likely to drink soda or energy drinks to get rid of dry mouth. This magnifies the damage caused by PG because these drinks contain sugar that feeds the bacteria and acids that further erode tooth enamel.”

Turner supported this claim saying saliva is the mouth’s best defense against cavities and without it, risk for disease “increases exponentially.”