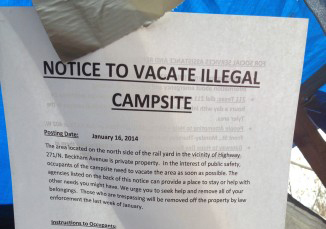 After sending out vacate letters and giving the residents of Tent City until Jan. 31, 2014 to move from the property, Union Pacific Police made a surprise sweep today in the area giving citations to any person on the property.

Residents scrambled to gather their belongings, so Union Pacific will not destroy them in the coming days.

Tim Harris of Camp P.S. 91, a mission camp run for the homeless by the homeless, brought in a U-Haul paid for by a donors around the area to help pack and move the camp and others from Tent City to a new location.

“As soon as I can get to a point to do so, I’m gonna call several of our backers,” said Harris, “and see if we can’t get three or four rooms to let everyone chill out for tonight. And then tomorrow, we’ll begin working on the temporary site.”

Union Pacific was unavailable for comment on this story. My TJC news will continue to follow this story and update it as new information comes in.