First female ambassador hired at TJC for the Fall semester 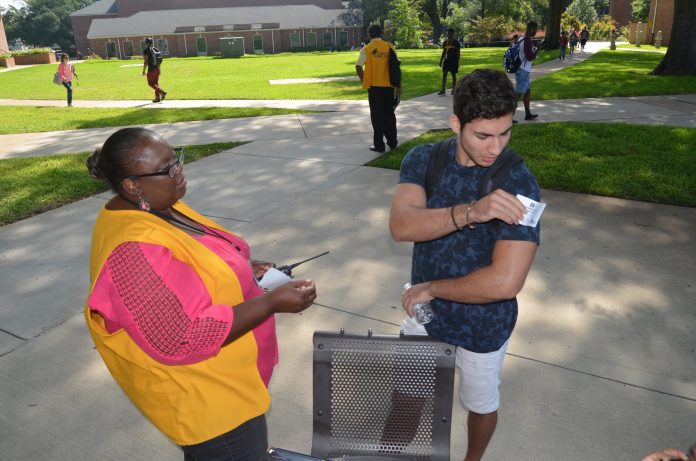 For the first time in its history, TJC hired a woman to work as one of the ambassadors around campus.

Billie M. Cooks is a former TJC student who recently started working as an ambassador. She has a Criminal Justice degree and is also a pastor at the Higher Dimensions Church in Tyler.

“I love TJC, I went to school at TJC, got my degree from here, and I have a passion for working with students.” said Cooks.

Being the first woman hired as an ambassador, Billie has a lot of thoughts on how her job can change the school environment, especially for the females on campus. Considering that the number of female students is 18 percent higher than the one of male students, according to collegeboard.com, she believes her position will have some impact.

“I believe being a female ambassador on campus gives the students a chance to not just see male ambassadors and look at them as father figures, since we’re here for their safety,” said Cooks, “But also to see a woman ambassador, and be able to meet some of the needs they may have from a female point of view.”

The male ambassadors embraced the idea of having a lady coworker. The way they see it, now the female students at TJC have someone they can identify with and understand them better, especially when it comes to the dress code on campus.

“I think before then, men did it and they didn’t really think a woman was as needed, until they realise they had no women to properly approach women,” said Cooks.

In their opinion, whenever a female student is dressed inappropriately, it’s more comfortable for both parties if a female ambassador approaches her.

“Sometimes there are things that happen in dealing with females that put us in a precarious position and some things are better when said from a female to a female than from a male to a female,” said Richard Robinson, TJC ambassador. “Because depending on the individual, some things can be taken off context.”

Often mistaken for Campus Police, the ambassador’s job is to supervise and help the students if they need help on campus. They’re mostly retired men, in their 60’s or older, who are willing to donate their time to keep an extra eye on the students.

“The main difference between police officers and campus police is that the police officers are certified, the ambassadors are civilian.” said Jimmie Vickers-Dews, Patrol Sergeant for TJC Police.

According to Sergeant Vickers, the decision to hire Billie was made focusing mainly on the need of some direction for the female students on campus.

“We hoped one day of getting a female ambassador,” said Vickers, “And with the ambassadors we are fortunate to have Billie.”