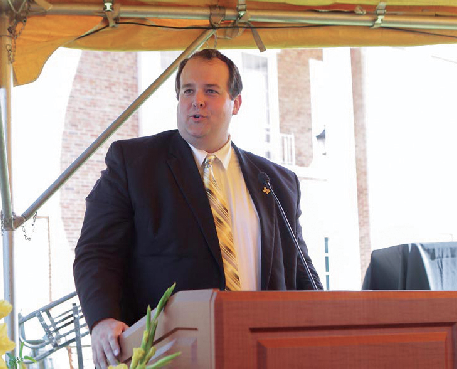 Tyler Junior College is used for most students as a stepping stone, either for the workforce or a four-year university. Winona Independent School District Superintendent, Cody Mize, used TJC to both prepare him for his career in education and his time at Texas A&M University.

“TJC laid the foundation of my academic success in college. I really learned how to study when I arrived on campus. The smaller class sizes helped make the transition from Mineola High School to the college setting. I would have been totally overwhelmed if I would have went straight to Texas A&M University,” said Mize.

Mize attended TJC after graduating from Mineola High School from August of 2001 to December of 2002 as a General Studies major. In his time at TJC,  Mize help found the TJC Collegiate FFA Chapter and also served as a Freshman senator in the student government. Along with his work he also made many memories and relationships while at TJC.

“My favorite memories were the people. I had the opportunity to build lasting relationships with my professors, who I still have to do this day. Also, the smaller class sizes allowed me to develop several friends that I still keep in touch with to this day,” said Mize. “My favorite class was Agriculture Economics with Frank Rucker. A close second was History 1301 and 1302 with Dr. Jeffery Owens.”

Mize’s career goal when he started at TJC was to be an agriculture science teacher and to coach baseball. His professional career started right after graduating from Texas A&M in 2005 as a 22-year-old. He began  as an 8th grade U.S. History teacher at Quitman Junior High. Along with teaching, he coached football, basketball and baseball. Mize’s journey included teaching and coaching experience in Grand Saline and Alba-Golden ISD. That is also where he took his first administrative job as a principal.

“Later on, I attended the University of Texas at Tyler where I received my Masters’ in Educational Administration and my Superintendent Certification,” said Mize.

In March of 2016, Mize was announced as the lone finalist for the Superintendent position at Winona ISD. He accepted the job, and attributes TJC as a major part of success. To prove this, Mize, with Winona ISD, partnered with TJC to start the TJC Promise. This allows eligible students from Winona and five other local school districts in East Texas to be eligible to receive up to two years of tuition and fees at TJC.

“As I said earlier, TJC laid the foundation for me to become a successful student in college. Not only did it provide me the study skills needed to be successful, but it was extremely affordable. With scholarships I accumulated, I was able to complete my time at TJC completely debt free,” said Mize. “I absolutely believe junior college is a great place to begin. I think a lot of kids coming from small, East Texas towns that jump to a four year university is a lot. Sometimes it is just too much. Tyler Junior College is the perfect place to start.”