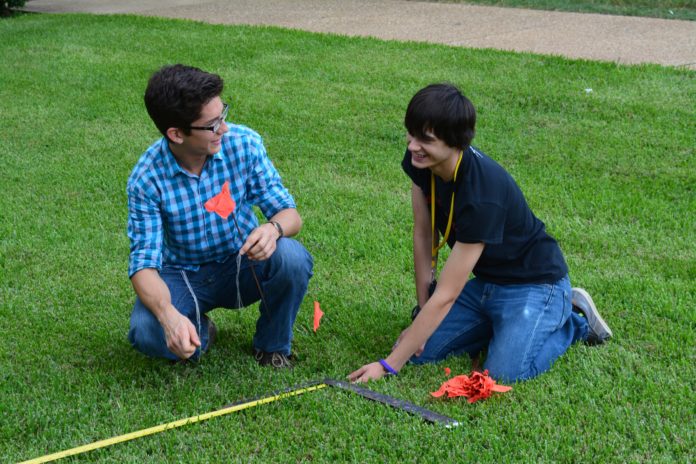 The Green Committee is working on their first project for TJC.

“This is the start of a movement,” said Daniel Seguin, President for the Green Committee. “This is going to be, hopefully, entire campus wide and reach the entire community. We’re planning on growing beyond just this little gardening space here.”

The Tyler Junior College Student Garden is going to be built by students’ for students and will bring a sense of community and sustainability to the school.

“This is going to be something that we can say ‘I did this,’” said Seguin. “… this is not just a school, this is our school. This is a place where we can make a difference, where we can put our thumb print and say that we did this and this is our project.”

Members of the committee are getting help from other school departments, such as art, honors, sociology, psychology, social work and biology, to make the best of their project. Bringing people together is one of the main principles behind this endeavor.

“All these different departments are coming together and creating a collective space for students to take ownership on the campus, and we’re hoping for that type of culture to grow across campus. Keep the campus clean, pick up the trash that’s around here and all that kind of stuff,” said Ryan Button, advisor for the Green Committee and sociology professor.

One main goal of the project is to generate community service and propose the idea that everything works best if done in conjunction; the Green Committee is also hoping to expand their effort to beyond TJC.

“We’re going to have a by-product of thousands and thousands of pounds of food,” said Seguin.

The plan at first was to use the food produced in the garden to supply TJC and make some of the things students eat at the cafeteria organic.

“We thought originally about making the school itself green, so everything we eat in the cafeteria would be food-grown,” said Seguin. “Of course there’s contracts with Aramark and some different things like that, that we ran into, so that ended up not being able to happen, but we didn’t give up.”

Instead of using the food grown in the garden to supply the school, they’re donating it and helping a greater cause.

Since this is the Tyler Junior College Student Garden, the funding is coming from the students. The Committee is receiving SSFAC money for the project.

“We could’ve taken the garden and got a name put on it, have a donor from outside of the college put up money for a garden, that would be an easy sell, who wouldn’t want their name on that?” said Button. “We held out for SSFAC funding, that’s student money, money that the students are giving us.”

Ryan Button was the one who inspired the students to take the initiative and try to implant more sustainability on campus. The student club started around two years ago. Everything began with the Honors Colloquium class.

“I don’t know if you ever had a class with Button, but he’s inspiring often times. He inspired us to go out and try to make a difference. So they said, why can’t we be green and make a difference here on campus?” said Seguin.

Students take a lot of inspiration from Button.

“He makes people think, really. He challenges everything you believe. So he’s the support for it, he’s the catalyst for it. He was there to help keep everything together,” said Seguin.

Initially, the club did not see the need to get associated with the school and were not trying to get recognized on campus.

“We were just kind of doing everything on our own.” said Button. “We worked with Dr. Ott and Dr. Boucher (Biology department) to get the space for the Garden that we are working on, and we really just didn’t have any reason to get associated with the college, because we didn’t have the need.”

With time, the committee grew larger. They were given spots around TJC to test out projects and also helped elementary schools like Douglas Elementary and TARGET Academy for Gifted and Talented with their gardens. Now with over one hundred fifty members, they finally decided to start this project focused on the college. Also, they never had a space of their own, and that was one of the reasons for the project as well.

“We’ve worked with local Elementary schools, Douglas Elementary, Target Gifted and Talented Elementary School. We worked with them and their gardens so we wanted a space of our own.” said Button.

According to Seguin, the project is planned to happen some time in November.  The members of the Green Committee are going to attend the opening event where they are going to give out free t-shirts and water bottles.

They meet on Fridays at 3:30 p.m. in the Honors Lounge on the third floor in Rogers Student Center.