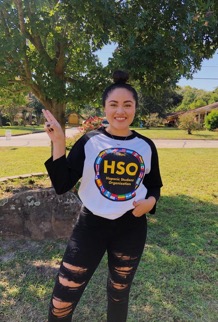 At TJC, there are different organizations that help students become a better person. They also teach students how to be successful in the future. The Hispanic Student Organization at TJC is offered throughout the campus for anyone who would like to join.

Brianna Arteaga, a sophomore at TJC and who is also the 2020-21 president for the organization, said, “It’s so much pride being Hispanic. There’s so much culture that comes with it. Beautiful people, beautiful music, and beautiful places. It’s amazing how different people from all over the world appreciate our heritage and how they show so much love no matter what ethnicity, race and country they’re from.”

HSO is helpful for the students at TJC, because overall the organization itself is to help and motivate their members to be the best that they can be, Arteaga said. Student success and engagement while in school is important because Arteaga knows that for first-generation college students school can be hard. She also mentions that a student’s determination is important because everybody knows college isn’t easy, and she wants students to be proud of being the best and being Latinos.

“I’d say that the one thing our students will learn and bring into this world from this organization is nothing but pride. Sometimes, as Latinos, we tend to feel out of place and not feel confident enough,” Arteaga said.  “So, the goal, if they take anything out from being in this organization, is for them to be proud of who they are and where they come from and to encourage others to do and feel the same.”

Bibi Carrasco, a sophomore at TJC who is a part of HSO, also said she is thrilled to be a member of such an amazing organization.

“I am amazed how far I have come, from not speaking English to graduating top 10 of my senior class to being where I am today,” Carrasco said. “It’s amazing how much our culture brings to the world and I am honored to be a part of the Hispanic heritage.”