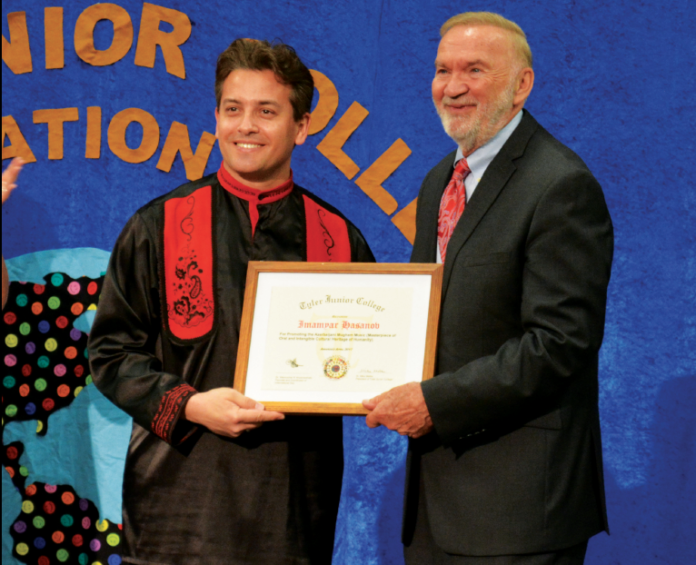 Each spring semester, students are given the opportunity to travel around the world for one day.

The 27th Annual International Day was held Tuesday, April 18 in the Apache Rooms.

“So much learning happens that is impossible to learn from a book, from a TV, from internet; it is just right there,” said Dr. Manouchehr Khosrowshahi, government professor and founder of International Day.

Tables covered with artifacts and information about many countries filled the Apache Rooms. Either music or information constantly played throughout the event. Entertainment rarely stopped. Ensembles from the Apache Band had performances, students and guests performed dances and sang songs from different cultures along with appearances from guest speakers.

The U.S. Passport Office even had a table set up where students, faculty and community members could apply for or renew their passports. However, most of the information presented at the event was given by students of Dr. Khosrowshahi’s.

“When they do these assignments, they learn more about America than about other countries; they see the differences,” said Dr. Khosrowshahi. “It’s not all about Russia, China…Brazil. It is really [about] learning ourselves by learning others.”

Dr. Khosrowshahi feels that his event is important not only for students’ education while at TJC, but for later in life.

“Look at the news. Education is very important. If you want to have a meaningful democracy, you have to have educated citizens,” said Dr. Khosrowshahi. “It’s very important to make democracy in the US meaningful and good example for the rest of the world by having knowledgeable citizens.”

“I think [International Day] is important. You get to meet a lot of different people and learn about their cultures,” said Prieto.

Prieto moved to the US when she was 9 years old, not knowing how to speak English.