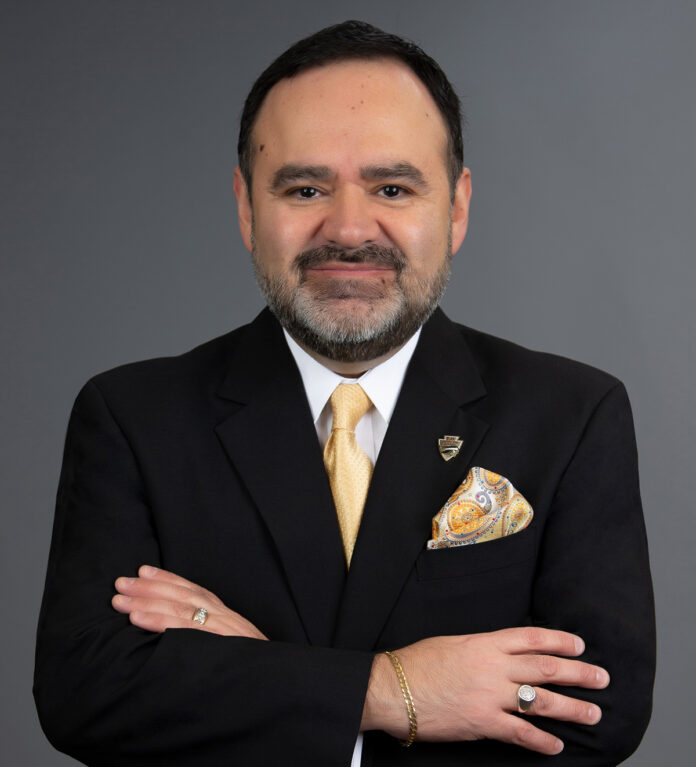 The TJC Board of Trustees met at 11 a.m. on Wednesday, May 1 and announced Dr. Juan Mejia as the lone finalist for president.

Tyler Junior College Board of Trustees has selected Dr. Juan E. Mejia as the lone finalist to be TJC’s next President.  Mejia currently serves as TJC’s President for Branch Locations & District Provost. The Board’s decision comes after an extensive national search and thorough interview process.

“The Board felt it was extremely important to conduct an extensive national search and engage in a very thorough process to identify the best candidate to be the next President of Tyler Junior College to succeed Dr. Mike Metke,” said TJC Board President Mike Coker.  “We feel we have identified that person in Dr. Mejia, and look forward to working with him as TJC’s next President.”

TJC received 83 applications, well more than recent national searches by community colleges nationwide.  A Board-appointed screening committee, consisting of a broad representation and members of the TJC faculty and staff, reviewed in detail all 83 applications.  The screening committee interviewed 11 semifinalists via a live video interview, and all Board of Trustee members reviewed the semifinalist video interviews.

The College brought four finalists to campus for a series of meetings, three public forums, and meetings with the Board. The input received from the faculty, staff, students and community leaders attending the forums was especially helpful and an important part of the evaluation process, according to Coker.  He also expressed special thanks to everyone who took part in this important task of choosing TJC’s seventh President.

Coker noted that Mejia was the first choice of the faculty, staff, students and community members who participated in the selection process.

TJC Chancellor and CEO Dr. Mike Metke noted that the Board of Trustees conducted a national search to find the right person to lead TJC.  “There were 83 applicants from across the USA and beyond.  After knowing Dr. Mejia for nearly three decades, I was especially pleased by how he rose to the top in such a strong pool of finalists.  It’s gratifying to search far and wide and then affirm that we have world class talent right here.  Dr. Mejia will start a new chapter of TJC history and take this College to new heights, working together with a Board that is second to none.”

As sole finalist, Mejia will be confirmed at a meeting on May 23 and will begin July 1 as the seventh President of Tyler Junior College.

Dr. Juan E. Mejia proudly serves the students and communities of East Texas through his role as President for Branch Locations & District Provost of Tyler Junior College (TJC).  He is approaching his six-year anniversary with TJC, and prior to this role, served as Vice President for Academic Affairs and Chief Academic Officer at South Texas College (STC).   Both STC and TJC are accredited as Level II, baccalaureate-granting institutions by the Southern Association of Colleges and Schools/Commission on Colleges.

He currently serves on the boards of the Community College Baccalaureate Association, the Tyler Area Chamber of Commerce, Leadership Tyler and the East Texas Human Needs Network.   He is a member of the Tyler Business Education Council, the Tyler Area Partnership 4 Education, the Smith County Seat Coalition and the Lindale Music Friendly Community Designation Committee.   He has also previously served on the Boards for the National Council for Workforce Education, the Texas Associate of College Technical Educators, the Literacy Council of Tyler, CASA of East Texas, and the Tyler Innovation Pipeline.

Dr. Mejia was the 2017 recipient of the Nelson Award by the Texas Association of Community Colleges, and he has been recognized during the 84th, 85th, and 86th Texas Legislative Sessions for his service to Texas students and communities through his role with a Texas junior/community college.   He was also recently recognized as a Distinguished Pioneer of the Valley Scholars Program by South Texas College.  He is a graduate of Texas State Technical Institute, Texas A&M University – Corpus Christi, and Texas A&M University – Kingsville.   He is a graduate of the Leadership Tyler’s Executive Orientation Series, and is an honorary member of Phi Theta Kappa’s chapters Beta Epsilon Mu at South Texas College, and Alpha Omicron at Tyler Junior College.

He believes in service to students and communities by creating a culture and environment where leadership is valued, learning is celebrated, collaboration is promoted, and personal and professional growth is encouraged and supported. His values include a commitment to the mission of junior/community colleges, the empowerment of everyone from the college community to achieve their fullest potential, an ethical value system where honor and principles permeate throughout, a vision for courage and legacy, and accountability and transparency that strengthens trust and respect within the College community and with external stakeholders.  Dr. Mejia is the father of five sons and he and his wife, Meela, reside in Tyler.