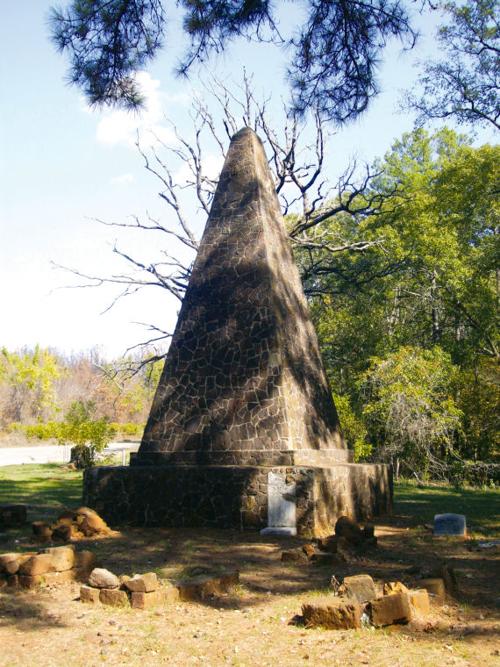 Photo courtesy of the Jacksonville Progress

The 182nd anniversary of the Killough Massacre near Jacksonville, Texas, fell on Oct. 5. The 1838 slaying of 18 settlers by individuals in Native American attire is still shrouded in mystery – responsibility for the murders is still under speculation, with some blaming the local Native population and others claiming the perpetrators were disguised in Native clothing.
According to the Texas State Historical Association, Isaac Killough and his family settled in Cherokee Country from Alabama in Dec. 1837. The settlement came after a treaty between Sam Houston and the Cherokee population, which designated tracts of land to the Native Americans, was nullified. The Killough family built a settlement and planted crops to harvest in the coming fall. However, when they returned from a period in Nacogdoches to harvest, they were attacked by a band of hostiles dressed as Cherokee Natives. Isaac Killough and 18 others were captured and/or killed.
Local authorities believed the murders to be committed by individuals from the local Cherokee tribe. The Republic of Texas Army later located a group believed to be the perpetrators at an old Kickapoo village; 11 band members were killed in retaliation.
Some individuals believe the massacre was a setup to remove the Cherokee population from the area. The event was only one in a slew of conflicts that incited the Cherokee war in 1839. According to KLTV, a stone monument was erected in the 1930s to commemorate the event, while a historical marker placed in 1965 blames the Cherokee population for the attack.
Nearly 70 years later, another mysterious attack occurred in Slocum, Texas, against the local Black community. According to the Texas Public Radio, on July 29, 1910, a shooting broke out near Sadler Creek in Anderson County. Three Black teenagers were attacked by a group of armed white men, killing one and injuring the others. Over the next 48 hours, a mob of white perpetrators made their way through the woods, killing unarmed Black individuals on sight. The total death toll is still speculated, but newspaper reports estimated between eight and 22 murders. Anecdotal evidence points to death tolls of up to 200, according to NPR.
The identities of the attackers, as well as the motivation behind the attacks, are unclear. The county sheriff at the time of the massacre, William Black, said he was unable to determine the cause. Seven indictments were initially handed down, but no attackers were prosecuted or convicted.
Currently, no historical marker or monument stands to commemorate the Slocum Massacre. Some community members speculate the attacks never actually happened, while some descendants of the reported victims continue to fight for local recognition of the event. Despite opposition from some county officials, the massacre was officially recognized by the state of Texas in January 2016.