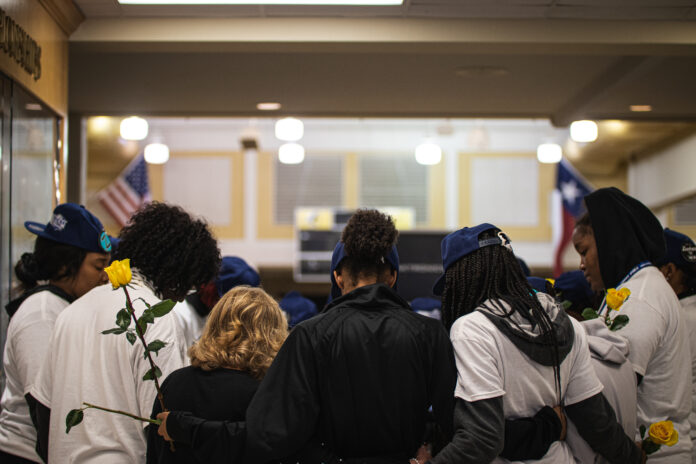 The TJC Lady Apaches basketball team capped off a thrilling season with a National Junior Collegiate Athletic Association championship win. Despite being seeding underdogs through all five of their matchups, the team fought through the adversity and doubt.

The TJC Lady Apaches basketball team competed as the 17th seeded team. The tournament began March 16 and ended days later on March 21. While the championship was less than a week long, the season leading up to the finals was a long and difficult road for the team.

The first game of the season was played Nov. 5 against Southwestern Christian College, ending in a win for the Lady Apaches with a score of 121-46. Following this game, the team went on a run of 5 wins and 2 losses to end November with an overall record of 6-2. They then continued their winning ways through December, going undefeated and heading into the new year on a high note and with momentum fully behind them. The Lady Apaches went on to win 10 games in a row before eventually losing against Panola College, which was ranked No. 20 in the country at the time. The team didn’t let the loss deter them too much though, going 2-1 in the next three games of January and 5-3 in February to end the regular season with an overall record of 23-7.

With the end of the regular season comes the beginning of the championship season. Despite a loss in the Region XIV tournament finals to Angelina College, the team’s record was still good enough to enter the national championship. They defeated 16th seeded Chipola College in a thrilling overtime game with a score of 67-65. The team then played No. 1 seeded Three Rivers Community College. Despite entering the tournament 28-1, Three Rivers missed their first 14 shots of the game, giving TJC an early chance to take a big lead. While not directly about this game, Coach Trenia Tillis Hoard’s words about the tumultuous nature of the tournament ring true.

“But you never know, based on seeding, how the girls are feeling and shooting on any given night, to win a national championship everything has to go in your favor,” Tillis-Hoard said. “It’s almost like someone has to knock someone off or someone has to play really bad.”

And knockoff they did. Three Rivers became the second straight No. 1 seeded team to lose in their first tournament game, changing expectations drastically. TJC didn’t stop there however, and the team began using the momentum from these two wins to beat the rest of their competition with a point differential of exactly 12 points in all three games. After defeating Georgia Highlands College in the finals, the Lady Apaches were able to bring home the second Women’s Basketball national championship to TJC, with the first being in the year 2000.

Jasmine Payne is a sophomore forward for the Lady Apaches basketball team who remembers her feelings of joy the moment the team won.

“Just happiness, I was on the bench at the time. I was just crying tears of joy; I was just so happy and thrilled to be feeling that feeling,” Payne said. “A lot of people kinda had doubt and to prove them wrong was just a happy moment.”

As the confetti fell, the team celebrated their names going down in history as the lowest-seeded team since 2010 to win the division one women’s basketball national championship. However, there was a different feeling coming from Coach Tillis Hoard, who is affectionately called Coach T by players, associates and fans alike.

“It’s surreal. You are just sitting there going, ‘Did this really happen to me?’ Even when the confetti is flying you get the feeling it’s for someone else. But it was fun, you watch games and watch basketball. For 22 years I’ve watched it happen to someone else and this time it just happens to happen to me, and you’re in the moment and trying your best to embrace the moment, not think ahead and just enjoy the moment. That’s what we tried to do,” Tillis-Hoard recalled.

TJC wasn’t the only school in Tyler to celebrate this momentous win either, with UT Tyler inviting the team and Coach T to their campus where they lit up Riter Tower in the signature Apache Gold.

“We wanted to do something special to celebrate with our friends at Tyler Junior College,” UT Tyler President Kirk A. Calhoun said in a press release. “This is a success the entire community embraces.”

This win does come with a bit of sobering reality to it. This team is at a two-year college, and with only three players eligible to come back for next season, the last time the majority of these women shared the court was to raise a trophy and celebrate a championship run that will go down in history.