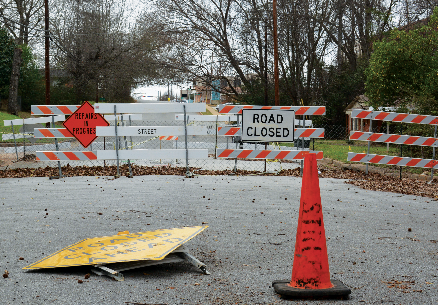 Since June of 2016, the bridge on Lake Street has been closed due to structural damage, which has proven to be inconvenient for some and is viewed as a hazard by others. The city has stated why the construction has been delayed, and when they anticipate the road to be repaired.

“This thing had been delayed much longer than it should have been,” said Jan McCauley, history and government professor and faculty senate president. “The greatest hazard, for me at least, would be in the case of an emergency. If we had a serious incident here … we would need to have as much access and egress as we could possibly have to the campus. That’s a main thoroughfare, particularly to get back to the health facilities.”

This bridge, which lies just to the west of TJC, has been closed with two visible sinkholes since June 16 of last year. The structure’s sheer age, which is unknown, and some heavier rain in the past few years has contributed to its structural demise.

“On a project like this,” said Kyle Dykes, project engineer, “we hire out a consultant to first design the project. They did a survey, they started design work, and when they got that done, we had to get some easements.”

Surveying the structure and the acquisition of the necessary easements have been the primary delays on the project. The owner of an adjacent easement rents out the land, so the city had difficulty in ultimately tracking the owner down. Aside from that, most of the easements were acquired with little delay.

“One of them was with TJC, and we had to go a couple of rounds with the board meetings,” said Dykes.

Margaret Williams, a resident on Lake Street, is one of the residents who have been inconvenienced by the closure.

“This was my primary street, going up and down at that light,” said Williams. “It has affected me quite a bit.”

The project will be brought to city council on March 22. If approved, construction is expected to begin by mid-April and be completed about four or five months later.

“Fortunately, we’ll be doing it during the warmer months, so it will be less rainy,” said City Engineer Carter Delleney. “That’ll help. Contractors appreciate that.”