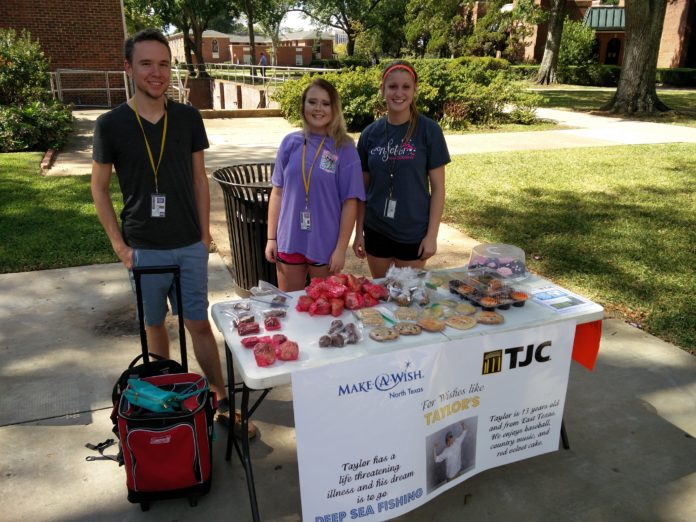 UPDATE: Taylor’s wish has come true! In an email, Professor Don Blaine announced that his leadership course has yet again raised enough funds to grant the wish of a Make-A-Wish child. Taylor’s wish was to go on a deep sea fishing trip. He visited the class on Wednesday, Nov. 30 to show his appreciation for their efforts.

ORIGINAL: A leadership class at TJC is taking the initiative, through some unique tactics, in raising funds for a Make-A-Wish child.

“The project is really just to take all the things we’ve talked about in class and give them an opportunity to apply it outside of class,” said Dr. Don Blaine, the professor for the 2309 Leadership class.

For the past 15 years, Blaine has encouraged his students to use whatever means possible to help raise donations for a Make-A-Wish child. This semester, they are raising funds for Taylor, a 13 year old from Whitehouse whose wish is to go deep sea fishing. Taylor has been diagnosed with osteosarcoma — a rare, but treatable form of cancer.

“They have to be between the ages of two and a half and 18, and they have to have a life-threatening medical condition, as determined by their physician,” said Amy Pearson, Development Officer for Make-A-Wish North Texas, about the requirements a child must have to be a Make-A-Wish child.

When Blaine started teaching the class, students were able to choose whatever form of charity work they wanted.

“There have been various projects like that throughout the entire time that we’ve had this leadership course. Even though I give them their choice to work on projects, they kept going back to the Make-A-Wish project once we started it,” said Blaine. “It just became a real good project, a real good fit for the class.”

The students have the whole semester to work on their project, which gives them time to plan some elaborate means of fundraising.

“It’s something that makes us feel good inside, because we have something greater than ourselves,” said sophomore Oland Roberts.

This class has chosen to utilize two means of gathering funds to achieve the $10,000 goal. The first is weekly bake sales. The bake sales are between Potter Hall and the library every Wednesday at 1:30 p.m. until around 5 p.m. Everything they sell is $1.

The second, more unique means of fundraising is the Terror Nights haunted houses. The class has been handing out flyers throughout campus. If one of the flyers is shown when a ticket is purchased, $5 of the ticket goes to helping Taylor.

To help them out, The Home Depot has agreed to match any funds raised up to $3,000.

For more information on their efforts, or to donate, visit ntx.wish.org.