TheDrumBeat.com
HomeNewsLet's go, Apaches: Cheer squad members say what it's like on the...
News

Let’s go, Apaches: Cheer squad members say what it’s like on the sidelines 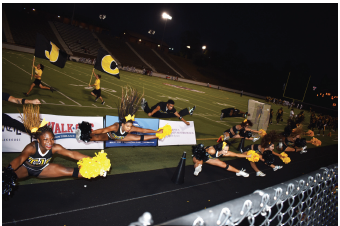 Michael Adams has been a cheerleader for six years starting in his 8th grade year in Jasper. In high school, his team placed 8 out of 86 in a UIL contest. He also did a lot of competitive cheer and won All American and National Cheerleaders Association Awards.

Now he is in his first year of college and is part of the cheerleading squad at Tyler Junior College. He chose to come to TJC because he thought it would be a fun experience to have with friends and also the cheer squad.

After graduating from TJC, Adams plans to attend Texas Southern University to continue his studies and obtain a degree.

“My career goals are to get my bachelor’s degree in social work and then move into a bigger city to get a good job and help my family and friends,” Adams said.

His greatest challenge has been managing cheer and school together, but he is working to get better at it.

Adams mentions being on the cheerleading squad has been a fun experience for him. His favorite thing about being a part of their team is being surrounded by people who he can always have fun with and learn new things with.

Kailani Stevenson is a first-time cheerleader this year, and she said she is very excited for what is to come as the year goes on.

“Cheer is hard work. I tried out for last year’s team and didn’t make it, so I had to work extra hard to make it this year,” Stevenson said.

She loves the fact that being on the team has given her the opportunity to have a strong bond with many people who she met this year. She knows she will always have someone to lean on.

Stevenson mentions she has a problem with her time management skills, but she working toward learning how to become more flexible with time.

Stevenson is from Tyler and graduated from Robert E. Lee High School. She decided continuing her education at TJC was best for her because she is shy and wanted to be around people she already knows.

She has big plans for herself after she graduates from TJC.

“I plan on going to Texas Southern where I plan to cheer and get my master’s in business,” Stevenson said. “I plan on moving to California, where I’m soon to start my own cosmetic line.”

Lauren Martin is from Mansfield, where she began cheering at 7 years old. She was captain of her team at Lake Ridge High School, and she was nominated for All American every year.

Before she started college, she knew she wanted to continue cheering, but she didn’t know what school she would attend. She visited TJC while hunting for the right school and instantly knew TJC was for her when stepping into the clinic. She said she loved the people she was surrounded by and she wanted to be a part a good nursing program.

After graduating from TJC, Martin wants to get a bachelor’s degree in nursing to become a pediatric nurse.

Martin talks about how her experience being a cheerleader at TJC has helped her realize how much they help each other as a team and how close they have become.

“It’s a lot of hard work, but we all motivate each other to keep going. We’ve built a really good bond, so it helps us not only want to do it for ourselves, but for the team,” Martin said.

Her favorite thing about her team is that they are like a family. They all have become close and they can talk to each other about anything.