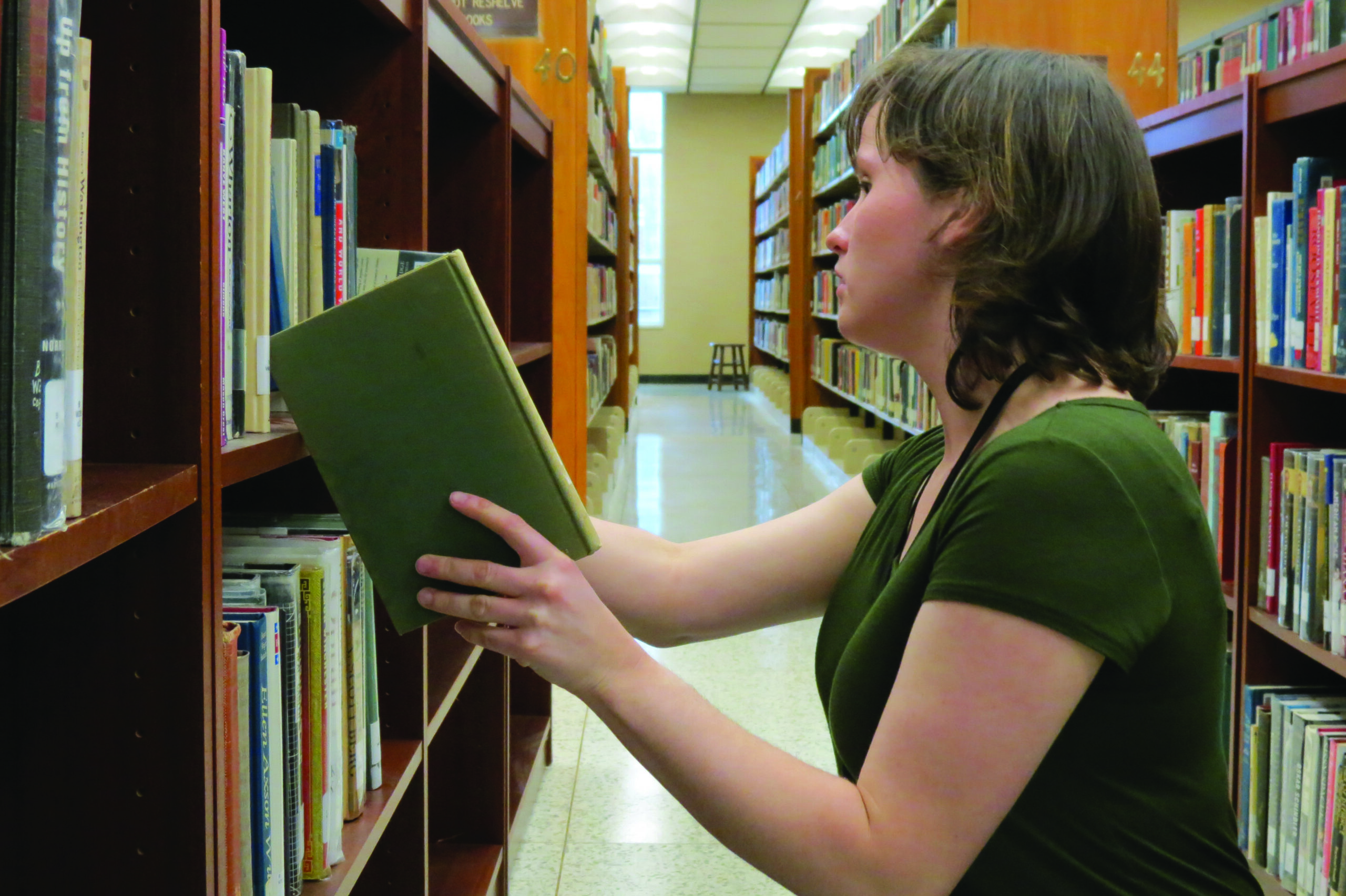 “Libraries, since their inception, have been storehouses for the world’s information, from clay tablets right up to the digitized items available today,” as put by Marian Jackson, director of Learning Resource Center and librarian in Vaughn Library, in a paper she wrote on the rationale for purging a number of books from the library.

Built in 1968, the Vaughn Library had a capacity of 100,000 volumes. In 2011-2012, it reached critical mass in excess of 105,000 volumes. The staff had to start stacking books on the floor or decide which materials were no longer pertinent or needed for the different courses offered.

By the end of the year, the staff selected around 13,000 volumes to purge. Including volumes that were obviously outdated, such as Modern Farming Techniques published in 1938.

In 1999, the computer card catalog system was set in place to make it easier for students to check out items and for the library to keep track of the number of times each book is checked out. Books that were seldom checked out, or in some cases not checked out at all, were also considered.

By the end of the 2011-2012 purge, the library staff believed its contents was comprised of a more pertinent and useful collection.

As of last fall, Pirtle Tech needed to incorporate 40 computers from a closed lab, formerly in room T315, in order to facilitate two additional Anatomy and Physiology Labs in Pirtle. In a collaborative effort between Vaughn Library and TJC’s IT department, a preliminary plan for a remodel of the library was offered. This also required another purge of print collections.

The majority of selections come from the Geography, History and Biography sections of the library. According to Jackson, Geography books just aren’t as necessary since the advent of Google and some government publications, including atlases, just aren’t put out in print anymore.

With classrooms, archives, more computers and other necessities like the Quest room, the Library is simply running out of space for all of the print collections. “We also got the Starbucks, which I really pushed for,” said Jackson.

“it’s my responsibility to not just yank books willy-nilly,” said Jackson. The library tries to meet the student’s needs and the professor’s requirements, but “In order to keep a growing, evolving dynamic collection … we can’t not weed some out,” she added.

Each year, the library budget gets cut a little more. Some is allocated to print material and some is for online resources. Jackson said, “I bought a Powerball ticket” with the intent of putting some of the winnings into building a state-of-the-art library for the school. “I didn’t win,” she added.

The library can’t simply pull books from the shelves. There are guidelines which must be followed.

The Southern Association of Colleges and Schools – Commission on Colleges (SACS-COC), which is the regional accrediting agency, sets the standards for what the library makes available. It requires a qualified staff, sufficient resources and sufficient availability of resources, such as with online materials.

According to SACS-COC core requirements, “it is expected that the institution provide appropriate library collections, resources and services at all locations, including off-campus instructional sites and branch campuses and offered through distance and correspondence education.”

Jackson explained that this means off-campus or distant students who take hybrid and internet classes, as well as the on-campus students, must have appropriate digital resources available to them.

Even with the over 14,000 e-books available at the library, there are problems.

Not all e-books are available for every platform. Companies like “the Nook [are] going out of business,” said Jackson. It may become necessary for the library to eventually begin lending out appropriate technology – tablets that students can use for the platforms available.

With database resources, like Proquest, purchasing multiple e-books is easier, but there is sometimes a concern with publisher pull-outs – when a publishing company pulls an online resource, making it unavailable.

The word “purge” might bring to mind a sense of destruction, but the books that the library purges actually go to Better World Books – a non-profit organization.

The donated books are sold to developing countries who need them. 10 percent of the proceeds from those sales goes to the National Literacy Council.

For the books that are not accepted by Better World Books, a table is set up in the library with a sign that says “free books” for anyone to take.

“When finding the book you’re looking for, I want students to look at the ones around it,” said Jackson, hoping that in the process a new discovery will be made – something that will be less likely in a completely digital library.

The general idea may be akin to VHS taking over for its once-popular Betamax predecessor, or the relatively quick outdating of VHS for the now common DVD, but Jackson believes that it will be some time before books are phased out, if ever.

The library will continue to have appropriate resources available in whatever format they can. One resource is Jackson herself. “My office is in front so students can come in who can’t find a book and pull up a stool while I help them look,” said Jackson.