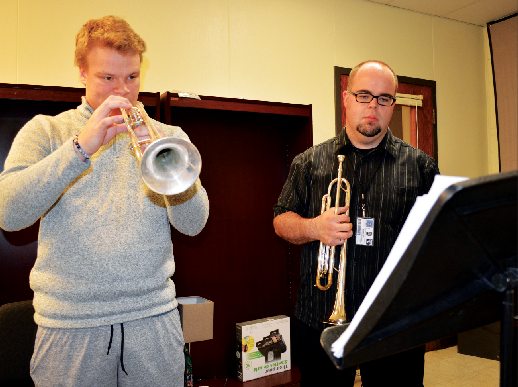 Bell was an adjunct teacher for two years and is now in his first year as a full time professor at TJC. Graduated from Texas Christian University with a masters in classical trumpet, and also attended The University of North Texas for some time, Bell made his way into music during his period in college.

“In all honesty, I went to UNT with the intention of making connections, and I wanted the opportunity to write music there. It was great, the connections I made during my years at UNT and what I learned is just priceless.” said Bell.

These connections definitely worked in his favor when Dr. Jason Bergman, who currently teaches trumpet at UNT, asked Bell to write a piece for his trumpet ensemble to play at TMEA.

“We were reunited on a gig last semester and he was playing some music that I had written,” said Bell. “And he asked me if I would write something for his trumpet ensemble, so he hired me to do that.”

Bell then wrote ‘Diversity United’, which was featured by the eight-member trumpet ensemble of UNT on Feb. 11 at the TMEA.

He also wrote another piece for Minneola Middle School entitled ‘The Pursuit’, featured by them on Feb. 10 at the same event.

“A part of it is easy for a middle school band to play, but it’s also something challenging and very impressive to listen to,” said Bell. “It’s called ‘The Pursuit’ because it represents the pursuit of happiness, you know, through life and basically trying to realize that you’ll have ups and downs, but if you keep your eye on the prize, it will all work out.”

One of his original pieces will also be featured in TJC’s 90th Anniversary Music Extravaganza on April 27, at 7:30 p.m.

“That’s kind of in the process of happening right now,” said Bell. “In April I think, they’re doing basically like a big celebration concert with the choir and and the ensembles for the 90th anniversary of TJC. I’m in the process now of writing some original music and some arrangements of some TJC-based music.”

Being someone who has written many pieces before, Bell believes that determination comes before inspiration in the process of writing.

“It’s one of those things… if you have a deadline to write music for someone you kind of have to rely on other things,” said Bell. “Usually, what [I] do, I start off with some simple melodic ideas, then I decide how I want to develop that melody, so instead of waiting for inspiration that I’d have to have, that may or may not come, I have to make it myself.”

Bell plans to continue to create his own pieces.