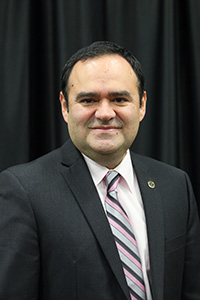 As TJC expands its territory throughout East Texas, the Board of Trustees saw fit to give Dr. Juan Mejia, District Provost and now President of Branch Locations.

In this new role, Dr. Mejia will oversee the outside campuses that TJC owns across East Texas, like TJC Rusk, TJC, Jacksonville, TJC West in Tyler, TJC North in Lindale and TJC’s Online Virtual Campus.

“The new role will allow me to go out to the community a bit more,” said Mejia. “The challenge is going to be strategic and intentional in the vast amount of opportunities which are the priorities for the institution.”

As this new role begins for Dr. Mejia, he defines TJC as a “powerhouse of higher learning,” and sees to expands the beauty and the feeling of our main campuses to our other campuses.

Dr. Mejia sees that in the near future, other Junior Colleges can look at TJC and see how, he, along with Chancellor Metke, Board of Trustees, faculty, staff and students reinvented Junior Colleges.

Even though it seems like a lot of time and work, Dr. Mejia admitted that his mindset will remain the same.

“I know why we do what we do,” said Mejia. “I believe in the missions of community colleges, but I want to reinvented.”

Times have change for Dr. Mejia, and he plans to use his “Meela Method” to make TJC a world class institution of higher learning.

The biggest challenge for Dr. Mejia when he arrived to TJC, was student involvement, with student organizations, and athletics

Dr. Mejia arrived to TJC in 2013, as Vice-President of Student Affairs, and since then, it has been non-stop for his dedication, as in 2016, he became the 1st hispanic District Provost, and now President of Branch Locations.

“I want to be broad base, so we all work together for a brilliant way of life for everybody that we serve,” said Mejia 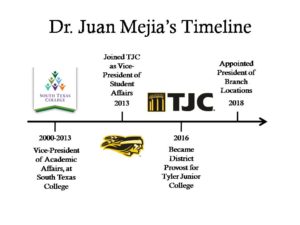