TheDrumBeat.com
HomeNewsNew rules change who can use which restrooms
News

New rules change who can use which restrooms 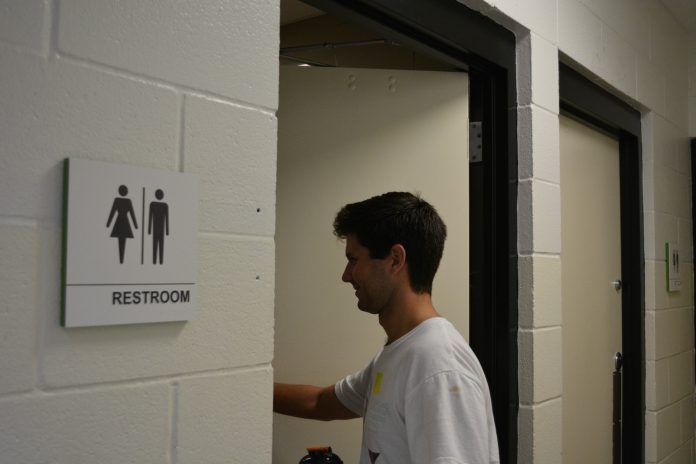 Responding to a new guidance from the U.S Department of Education, TJC students are now allowed to use the restroom correlating to the gender with which they identify.

“Whatever a person identifies themselves as, that’s the restroom they can use. It doesn’t matter how they look,” said Dr. Dometrius Hill, TJC Dean of Students. “If I said the inner me identifies myself as a beautiful woman, I can use the womens’ restroom.”

On May 13, the Office for Civil Rights Division of the U.S. Department of Education issued a letter of “significant guidance” to colleges and schools. It states that schools in the United States strive to create nondiscriminatory communities for all students. Also, Title IX of the Education Amendments of 1972 prohibits sex discrimination in any educational programs operated by recipients of Federal financial assistance.

“Texas colleges have been instructed to allow their students and employees to use the restroom that is consistent with their gender identity/expression,” said Kimberly Lessner, Executive Director of Marketing – Media and Communications. “Single stall bathrooms have been converted to family restrooms available to all. This was not done for any particular group, but to accommodate anyone with disabilities or desiring privacy.”

“Gender identity refers to an individual’s internal sense of gender. A person’s gender identity may be different from or the same as the person’s sex assigned at birth,” according to the U.S. Department of Education letter.

Some say TJC was not obligated to make any changes regarding the restrooms, because the guidance is not technically a law.

“This guidance does not add requirements to applicable law, but provides information and examples to inform recipients about how the Departments evaluate whether covered entities are complying with their legal obligations,” according to the U.S. Department of Education letter.

But officials at TJC said the college didn’t have a choice.

“We will have to abide by [it] if we want to continue to get funding,” said Dr. Hill.

This new change affects all public restrooms at TJC, including the ones for single genders but have multiple stalls. Students now might face the situation of sharing a bathroom with somebody from the opposite sex or gender identity.

“In a lot of foreign countries, they have unisex bathrooms. Literally, you go to the bathroom, a lady goes to the same bathroom. You go to your stall, she goes to her stall. It will be a mindset type deal,” said Dr. Hill.

Many students may not be comfortable with the new arrangements, so to make it more comfortable for all, Dr. Hill suggest that students should express what they want in the Student Senate. Enclosed partitions and modular walls are his suggestions to bring more privacy to the stalls.

“If you got a brother, if you got cousins, you’ve been in the bathroom while somebody is in the bathroom at the same time. The difference is that you don’t know who enters the bathroom,” said Dr. Hill. “You as a female, and he as a male, it creates a certain set of challenges mentally…I get it, my recommendation is that if it makes you feel uncomfortable, leave.”

Common sense is welcomed and required regarding the new arrangements.

“The deal is: Is anything truly 100 percent safe? No. But you have to try to minimize the risk as much as possible…You are your best defense, be smart, be aware, and don’t put yourself in risky situations,” said Dr. Hill.