TheDrumBeat.com
HomeNewsNine items stolen within 19 days in the same area on campus
News 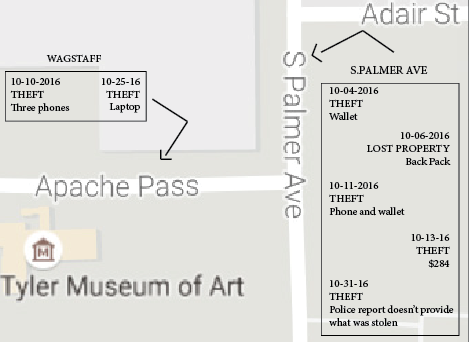 Cell Phones, laptops, wallets and a backpack – nine items were stolen in 19 days in the same area on campus.

“After our phones were taken, some basketball girl’s phones were taken not too long after that. So now everybody is locking their doors and being more precautious on things like that,” said Halee Brewer, TJC student who had her phone stolen.

The items reported to Campus Police as stolen were in the Apache Pass and S. Palmer Ave intersection. The buildings where ,Wagstaff gymnasium and O.H.P.E. Also, the parking lot in front of both buildings, S/R-13.

The police reports include a total of four phones, two wallets, a backpack, a laptop and $284. All the items were left unattended.

Girls from the volleyball team left their cell phones in the locker room in the Wagstaff gymnasium and went to practice. When back, their phones weren’t there anymore.

Brewer didn’t file a police report, but two of her teammates who had their phones taken did.

“I didn’t do the police report, I just didn’t think they would be able to help me enough. Other than that, hearing that other people’s things have been stolen, cellphones, laptops and things like that and what they said about how the police report went,” said Brewer.

Chief Melton changed the route of a few ambassadors to try to prevent these incidents, now adding more eyes in the area of the recent crimes. He also emphasizes the importance for students to report any and all crimes to campus police.

“How can the police know to help you, if we don’t know about it? If you don’t report things for us, ‘I can’t read tea leaves.’ We can’t help you if you do not report,” said Melton.