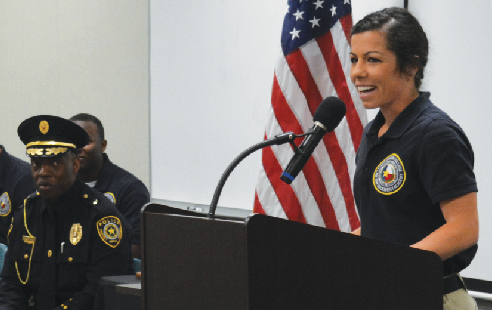 “This was an excellent class,” said Lieutenant Herbert Hayter, director of the academy. “Academically, they were on top of it the whole way.”

This class stands out from past graduations since the overall GPA was the highest in the academy’s history along with being the largest class of cadets to graduate.

“I would stress about them maybe not passing a test or not scoring high enough, and every time, they proved me wrong,” said Hayter.

The valedictorian of the class also holds the highest GPA in the academy.

Rodseth originally went to school in Idaho, but had to put her Master’s studies on hold to attend the academy. Her husband’s work brought them to Tyler, so she decided to join the police force.

“We’ve put our roots down here, so I gotta start focusing on my career and goals that I started in college,” said Rodseth.

With the highest GPA in the academy, Rodseth set a historic milestone for cadets, both past and future.

“I feel very blessed to be in this academy,” said Rodseth. “I’ve had great instructors, and great classmates. We had a very competitive class.”

All 20 cadets also impressed instructors by passing the State Licensing Exam on the first attempt. The 19-week course is purposefully constructed to be challenging, both physically and academically.

“We have one of the top rated academies in the state,” said Assistant Vice President of Student Affairs Dr. Tom Johnson. “In fact, we’re rated clearly outstanding, which is big.”

The course includes extensive training on firearm skills, driving, understanding of state laws and much more. For questions about the program, Tom Johnson can be contacted at tjoh@tjc.edu, and Lt. Hayter at hhay@tjc.edu.