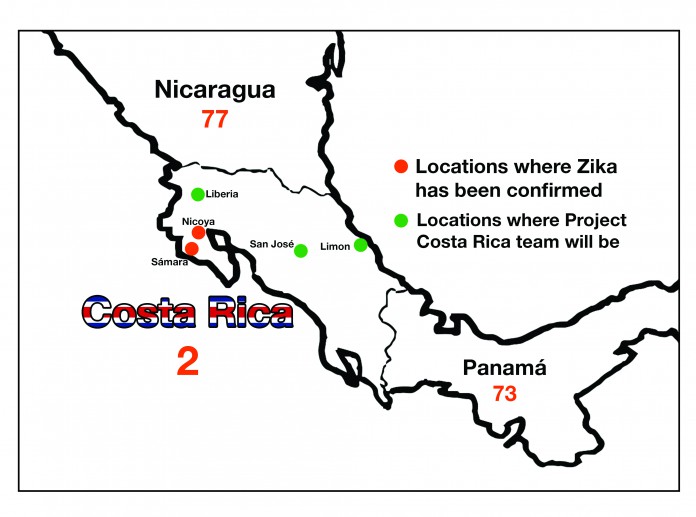 TJC’s annual community service trip to Costa Rica will go ahead as planned in spite of confirmed cases of Zika disease in that country, school officials said Feb. 23.

“The Zika once again is a minor virus, but it has repercussion for pregnant women. It can make you very sick but for the most part is like any other Latin American disease like the dengue,” said John Hays, department chair of Foreign Language and Spanish professor.

Since 2009, the Project Costa Rica has been an annual “collaboration between University of Texas at Tyler and Tyler Junior College to give global exposure/experience to our students while at the same time working in a rural Latino setting effecting relationships,” said Hays.

According to the Center of Disease Control and Prevention, “Zika is a disease caused by Zika virus that is spread to people primarily through the bite of an infected Aedes species mosquito.”

Zika was previously reported in tropical areas such as Africa, Southeast Asia, and the Pacific Islands. However, Pan American Health Organization reported an alert in May 2015 confirming that Brazil had the first Zika virus infection case.

This was the start of transmission of Zika virus within 18 countries “This is twice the number of countries and territories that were reported as having locally transmitted cases of Zika in the previous epidemiological update (Dec. 1, 2015),” according to Pan American Health Organization’s website.

One of the countries on the list is Costa Rica, located in Central America where each year since 2009 TJC has gone for this project “Dr. Metke was a Peace Corps Volunteer as a young man in Costa Rica,” said Hays.

“There will 14 people in all, two advisors, seven students from TJC, and five from UT Tyler,” said Hays.

Following the situation in Latin America, the main participants of Costa Rica Project convened a meeting to finalize details of the trip to be held in May. 16-25. Teresa Kennedy, Senior International Officer, Kathleen Everling Assistant Professor of Education were the representation of the University of Tyler in this meeting. In addition, Dr. Michael Metke, president of TJC, Stephanie Eijsink ETMC First Physicians Clinic Service at TJC and John Hay were present at the meeting which ended in the continuity of the community project in Costa Rica in the year 2016.

“We just had a meeting Tuesday with regard to the specifics of the itinerary and precautions that we need to take because of certain things that are now happening in Latin America over which we have no control,” said Hays.

Presidential government of Costa Rica, The Ministry of Health and the Costa Rican Tourism Institute posted in a press release “Zika virus should not be an impediment to domestic and foreign tourists to visit the various tourist attractions of Costa Rica.”

According to Hays, the group will finish building the fence around the elementary school, fertilizing trees that have already been planted, teach English classes in primary schools and Dr. Metke wants to do a Tobacco seminar “we will be busy for two days on the project, but 10 overall. We are going to several areas,” said Hays.

According to Hays, they have not even set a date for the preliminary meeting of the trip in order to confirm details, however this meeting must be done before May. 12.

The Center for Disease Control and Prevention website published a series of prevention tips against Zika virus.

After returning from Costa Rica, travelers should themselves for symptoms.

CDC announced some symptoms and treatments for this disease.