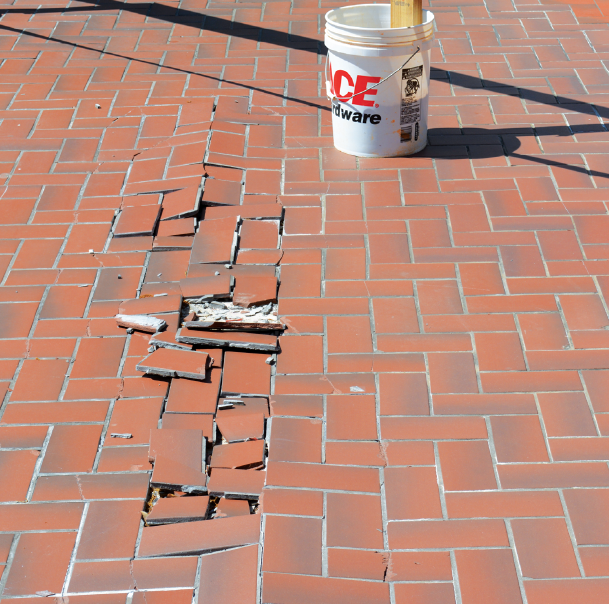 Plans are in the works to permanently fix the damaged walkway surface in front of Rogers Student Center.

“Since I’ve been here, six years, we’ve had problems with this,” said Mark Gartman, the associate director of facilities and construction.

This isn’t the first time that this particular walkway has given students and faculty problems. The buckling tiles are a result of the structure reacting to the cycles of extreme heat and cold throughout the year. In the summer heat, it expands, and subsequently contracts in the cold.

“After winter, we’ve always had problems with this thing,” said Gartman. “There’s nothing wrong with that walkway, it’s just got the wrong material … This tile is not a movable material, it’s a hard material, like a cracker. It breaks.”

The walkway, much like an elevated concrete bridge, is more susceptible to weather than a grounded path, which is why this particular part of the walkway has been so difficult on repeated occasions.

“It’s like road surfaces, you see it all the time on bridges — they have the same problem,” said Gartman. “The pavement buckles, because the structure moved more than the surface did.”

Instead of simply replacing the patch of tile again, which probably wouldn’t prevent future buckling, Gartman has proposed to completely strip the tile from the walkway. They will be replacing it with a rubberized material similar to that found on an outdoor running track.

“It’s supposed to have a 20 to 25 year lifespan. It’s soft, and it’s with a glue that doesn’t get hard. … So now when this thing twists and moves around, it’ll move with it,” said Gartman.

Since the entire walkway will be blocked during construction, Gartman plans to wait until after the end of the semester to begin renovations.

“It’s a six-to-eight-week process to get this material in and to get everything prepped. Of course, it’s going to be a big process,” said Gartman.