TheDrumBeat.com
HomeNewsReview: ‘1917’ is a technical landmark, an engaging story for cinema-goers
News

Review: ‘1917’ is a technical landmark, an engaging story for cinema-goers 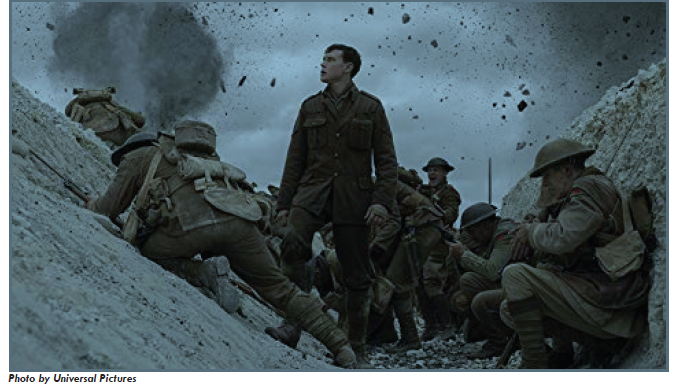 From the director of “Skyfall,” Sam Mendez strikes again with his film “1917,” an epic war movie set during World War I.

The movie follows two British soldiers, Lance Corporals Blake (Dean-Charles Chapman) and Schofield (George MacKay), who are tasked with an incredible mission to deliver a message miles away from their trench to another company’s trench through no man’s land and dangerous enemy territory. The message is to call off an attack and attempt to save the lives of 1,600 British soldiers, including Blake’s older brother.

For the next two hours the audience embarks on this gut-wrenching journey of these two ordinary soldiers enduring extraordinary situations in the selfless act of saving their comrades lives.

The movie was filmed as if it was shot in a single take. The transitions from scene to scene are almost seamless. I had to keep myself from biting my nails off through almost the entire film. I felt like I was right there with the characters in the middle of their arduous journey. I could feel the actors’ pain and their sadness. The sight of the hundreds of dead bodies was disturbing.

The movie “1917” is being nominated for 159 awards, including 10 Oscar nominations. One of the nominations is for cinematography, and it is well deserved. The imagery in this film is so meaningful, and everything has its place. The movie starts with the two main protagonists having a peaceful nap on a beautiful field under a big shady tree. To me, this symbolized how the rest of the film was going to go. This first scene was the calm before the storm.

In one scene, the main protagonist is running for his life without his helmet or rifle, and the sound of bullets ricocheting off the walls and surroundings had me ducking in my seat and my heart beating out of my chest.

It really is an incredible film. I left the theater speechless. It left me thinking about how life can be over in such a short moment. After watching this film, I feel more desensitized to this world than when I went in.

Also, “1917” gave me more respect for veterans who have fought for their country’s freedoms. It amazes me to think about what these men and women go through after having life-changing experiences that come with war. To think that they must re-establish their lives after seeing that much trauma must be excruciating.

Go see “1917,” this is a beautiful movie of selflessness and honor. You will not regret it!