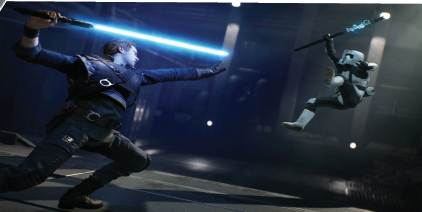 While the “Star Wars” saga is currently in full swing promoting a battle between the New Order and the remnants of the rebellion, Respawn Entertainment is focusing on a more interesting point of the “Star Wars” timeline.

The upcoming video game “Star Wars Jedi: Fallen Order,” takes us back to the events following the film “Star Wars Episode III: Revenge of the Sith,” with a cool new twist. While the events of the third film certainly showed that Jedi’s were being hunted down, we never really got a close-up opportunity to observe this.

That is, until now. “Fallen Order” showcases the story of Cal Kestis, an abandoned “padawan” who was forced into hiding. With his training incomplete, Kestis quickly recognized the opportunity to remain hidden from the encroaching empire.

The plot of the game is quite simple with the rust hacks. You play as Cal Kestis, and learn that he has successfully blended in and escaped assassination. That is, until he is ultimately faced with a decision: let his friend die, or sue the force to save him. Kestis chooses the latter.

Making the morally correct choice to save his friend has caused the once undercover Jedi to start running for his life. This is where we take over. Although limited at first, mostly because Kestis never completed his training, we must attempt to navigate past the Empire’s pursuit, all the while growing in power.

While many “Star Wars” fans are worried the game is being pushed out by Electronic Arts, the company that has notoriously used “Star Wars” titles as cash grabs, some rest in the promise that it has ultimately been produced by the Respawn Entertainment gaming studio.

While strangely similar to the events in past games, such as “Star Wars: The Force Unleashed,” at least this game allows players to take the role of the “good guy.” The game has already revealed it does not contain a multiplayer feature, so be smart with your money. Do a little bit of research before fully investing $60 into a game that may or may not take you a few hours to complete.

The game is set to be released Nov. 15 and should be an interesting addition to the limited “Star Wars” video games that have been released since Lucas Arts relinquished their distribution rights to Disney.