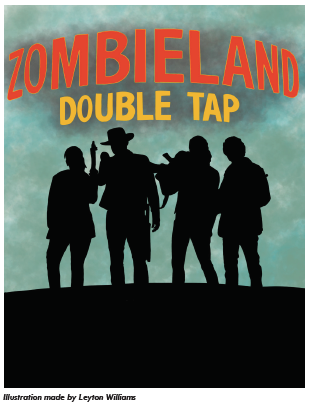 Ten years have passed since the film “Zombieland” gained a cult following and has been anticipated with a sequel. Now, with an Academy Award-nominated cast and one winner, Emma Stone, we have been invited back into the horrifyingly funny world again. And as far as sequels go, especially comedies, this one definitely lives up to its predecessor.

All of the original cast has returned to reprise their roles, and they are all great. Jessie Eisenberg and Woody Harrelson have an excellent chemistry as they did in the first movie, along with Stone and Abigail Breslin. All of them feel as if they’ve been friends for the longest time. It’s not just due to their performances, the script they get to work with is extremely witty and clever, and it leaves enough room for improv if need be. Every line and action feels appropriate for their characters.

However, as far as the new cast, there was one actress who I hadn’t seen or heard of before named Zoey Deutch. She plays the character of Madison, a dumb blonde who loves the color pink and acts as a stereotypical blonde archetype. She had a very tough role to pull off because she could have easily become an annoying presence like Jar Jar Binks from “Star Wars.” Luckily, she was one of the most hilarious and best aspects of the movie. The last “Zombieland” made stars out of all the cast, and I feel Deutch will have a bright career ahead of her, as well.

Deutch wasn’t the only new face in the world of “Zombieland.” Avan Jogia plays the character of Berkeley, a guitar playing hipster that results in hilarious head-butting with Harrelson’s character.

The filmmaking and violence level felt as if they were bumped up a few notches. There were two sequences that involved running from zombies in tightly-condensed areas and they shot it as if it was one continuous shot. It was very well thought out technically and comically satisfying with the events in the scene. The over-the-top violence added a lot of grit to the slapstick of the movie. Many comedies today lack well made slapstick, so it was nice to see it done and done well.

As far as negatives, I would say it follows some similar beats as the first. It isn’t a complete re-hash of the first one, but for those who love the first film they will probably notice some of the similarities. For example, in the first movie, Harrelson’s character is searching for a random object that is significant to him. In the first film, it was a Twinkie, which had an actual thematic point to his character unlike in the sequel. In the sequel, it felt like Tallahassee was searching for something just as a callback to the original film.

There is also a part of the movie where they meet a character played by Rosario Dawson. At this point, the movie felt as if it kind of lost the momentum it had been building. It wasn’t because of her performance. It just felt as if it were there to fill up time, which made it come across as lazy. However, this section of the film did give us two hilarious characters played by Luke Wilson and Thomas Middleditch, who play mirror characters to Eisenberg and Harrelson. That sequence was very clever and well done.

Overall, I would highly recommend “Zombieland: Double Tap.” It has a great cast, a great script and awesome zombie-killing action. This film would be perfect for any group or individual to have a fun time with.