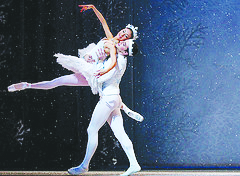 This Christmas season, the TJC Academy of Dance will introduce an all new version of the classic “Nutcracker”.

This will be the academy’s 26th year to perform this annual holiday production, but this is the first year for its new director, Carolyn Hanna. Although the plot of “The Nutcracker” remains the same every year, Hanna will be re-choreographing the entire ballet.

“It’s really a tradition. Something that the community is really excited about,” said Hanna, director and program coordinator of the TJC academy of dance.

The production is open to the public, not only TJC students. “It’s very packed … This year we expect to probably sell out every show.”

The Nutcracker is about a little girl, Clara, who receives a nutcracker doll as a present during a Christmas Eve party thrown by her parents, Mr. and Mrs. Silberhaus. The doll is given to Clara by her mysterious Uncle Drosselmeyer. Clara is fascinated by this doll that her uncle has given to her. After the party has ended and the children have gone to their beds, Clara creeps back downstairs looking for the Nutcracker because she cannot stop thinking about it. When midnight strikes, odd things begin to happen inside the house. The room starts physically growing and Clara is attacked by a clan of mice led by their mouse king. The Nutcracker then comes to life, along with the toy soldiers, and they fight together to protect Clara. Clara ends up killing the mouse king and being the hero by throwing one of her shoes at him. Immediately after, the Nutcracker falls to the ground, lifeless. Clara captures the Nutcracker in her arms and he then comes back to life, but this time he is a handsome prince. He dances with her and then leads her to the kingdom of sweets. This is where the Sugar Plum Fairy is told of the mouse king’s defeat. The Sugar Plum Fairy makes them the guests of honor and hosts a performance for them including everyone from her kingdom. This performance includes a wide variety of dances from Spanish, to Russian, to Arabian and many others. As the celebration performance ends, Clara falls asleep. She then awakens as the Nutcracker salutes his princess Clara.

“It’s very holiday driven,” said Hanna. The production is presented in early December, as Christmas nears. “It’s really fun for all ages, all types, for people who have never seen dance and for people who are extremely familiar with it.”

One of the volunteers, Mary Wright, who is a major help with “The Nutcracker” has been involved since the first production. She knows a lot about the setup, the dancers’ and the process it takes to produce such a big ballet.

“They have a whole group of people that work on costumes. They stitch them, put on trim, make them smaller, make them larger and then there’s one person in charge who follows the director’s instructions,” said Wright. The actors and dancer’s get to wear new costumes sometimes, but they do use previous costumes as well. “They have one whole Saturday (along with the rehearsals) that they measure the dancers’ for their costumes and then try to match them up with the costumes that they have,” said Wright. They just have to re-customize them each year to fit the body of the dancer who will be wearing the costume now, rather than the dancer who wore it last year.

“[Everything] has to be ready by the dress rehearsal,” said Wright. “The costumes, the backdrop, the sets, the props, the young dancers, the adults, and the guest artists.” It’s all a very detailed process.

There is a lot of time and determination put into “The Nutcracker”. For the cast members, the practice that they put in really does show in their production.

“It’s a lot of work. If you’re a ballet dancer you dance about six days a week, maybe seven,” said Wright. “They (also) have to have more control in their movements than most sports.” Ballet requires a lot of precision. The dancers’ have to focus on their every move. They have to remember how much to move their bodies and exactly where to move them. It can be a very challenging task. “As each year has gone along, the organization has gotten real fine-tuned. I see them progressing,” said Wright.

Adding some spice to the cast

Two guest artists from the Dance Theatre of Harlem, Nayara Lopes and Dylan Santos, are coming to Tyler to take part in “The Nutcracker”.

“I love it. It’s beautiful and I have a great time doing it,” said Dylan Santos, one of the guest artists from the Dance Theatre of Harlem. “This is going to be my first time (at TJC) so I’m really excited. I know there’s a cast party and everything, too, so we’re going to get to know everybody. I’m definitely looking forward to it.”

Wright will be hosting Santos and Lopes while they are here in Tyler for the production.

“When you’re away from home, a hotel can be so … just not hospitable. When you’re in someone’s home they can help you with different things like how to find things in town and give you a few extra snacks and drinks and stuff to take with you,” said Wright. “Since I’ve been a part of the dance scene and I have extra bedrooms and my daughters are married and gone, I just volunteer (to house the guests),” said Wright. “It’s an indicator of how Tyler shows hospitality. We just welcome people in.”

The cast members don’t even have to be TJC students. Anyone can audition. “What’s great is we’ve had people who have been here (participating in the production) since the beginning, since the first production,” said Hanna.

“There’s a handful of them for sure, which says a lot about the production that they want to keep doing it year after year. It really means a lot to them, to their family, and they’re really proud to be a part of this.”

The youngest cast members taking part in the production are 6 years old. The oldest is over 80 years old. Every Saturday, they pour their hearts and souls into rehearsal. “It’s a lot of preparation, but it’s worth it and everybody is really proud of the end result, so it’s great,” said Hanna.

General public tickets go on sale Nov. 7. General admission is $15. TJC students, senior citizens and children under the age of 12 are $10. Tickets can be bought online at http://nutcrackertjc.eventbrite.com.