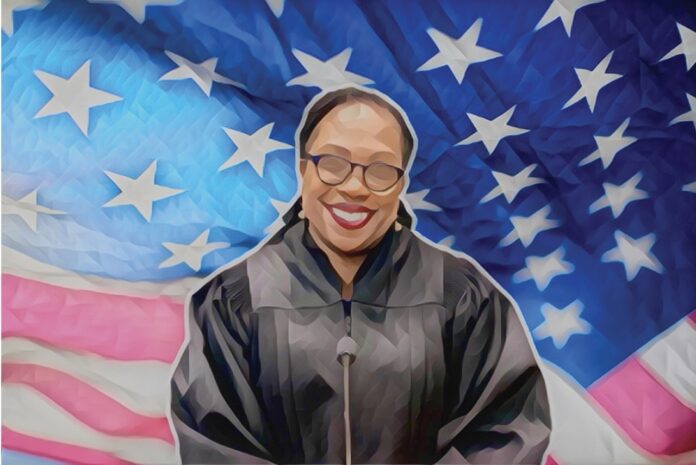 The Senate voted 53-47, with 50 members of the Democratic party alongside three Republican senators, Susan Collins, Mitt Romney and Lisa Murkowski voting in favor of Jackson’s confirmation. Jackson will officially take the place of Justice Stephen G. Breyer who will be retiring at the end of the court’s session toward the end of the summer. For the time being, Jackson will continue to serve in the U.S. Court of Appeals.

According to Apnews.com, “Jackson will be just the third black justice, after Thurgood Marshall and Clarence Thomas, and the sixth woman. She will join three other women, Sonia Sotomayor, Elena Kagan and Amy Coney Barrett – meaning that four of the nine justices will be women for the first time in history.”

In a tweet, President Joe Biden shared his congratulations alongside an image of the two taking a selfie after the big moment.

“Judge Jackson’s confirmation was a historic moment for our nation. We’ve taken another step toward making our highest court reflect the diversity of America. She will be an incredible Justice, and I was honored to share this moment with her,” Biden tweeted.

Others outside of the White House also celebrated in a moment of joy.

“My initial response was joy. I was very proud that I have the pleasure to see a black woman have a place on the Supreme Court,” Ayanna Bell, President of The Black Student Association said.

Her confirmation was also seen as a win for the democratic party. While democratic senators celebrated, the 47 opposed republican senators did not partake in the celebration with them.

According to The New York Times, “as applause echoed from the marbled walls, Senator Mitch McConnell, Republican of Kentucky and the minority leader, turned his back and slowly walked out, as did most of the few Republicans remaining on the floor, leaving half of the chamber empty as the other half celebrated in a stark reflection of the partisan divide.”

A majority of Republican senators viewed Jackson as qualified for the position but highly disagreed with her political views as well as previous sentencing decisions.

“When it came to one of the most consequential decisions a president can make, a lifetime appointment to our highest court, the Biden administration let the radicals run the show,” United States Senator Mitchell McConnel said.

Some believe Jackson’s confirmation into the Supreme Court will have a significant impact on future generations to come.

“History will be changed forever now that people of color know they have a chance to have a spot on the Supreme Court. It gives our younger generations more to dream about,” Bell said.

In addition to the historical aspect of Jackson’s confirmation, her views may bring new insight to conversations held within the court.

“And so she does bring a unique perspective, that may not change the vote, because like I said, the ideological structure of these cases, you know, is what it is. But it’s certainly going to kind of create new chances for dissenting opinions or from majority opinions, it’s going to create new dialogue within the court itself,” said Jamie Bitzenhofer government professor at TJC.

Jackson first received her degree in law in 1996 at Harvard University and Harvard Law School. According to the New York Times after receiving her degree Jackson, “held three clerkships with federal judges, including in 1999 as a clerk to Justice Breyer, who she is now under consideration to succeed more than 20 years later.”

Most of her career was spent as a judge in the U.S. District Court for the District of Columbia Circuit until 2021.

Jackson is also a member of, “The Judicial Conference Committee on Defender Services, as well as the Board of Overseers of Harvard University and the Council of the American Law Institute. She also currently serves on the board of Georgetown Day School and the United States Supreme Court Fellows Commission,” according to The United States of Court Appeals District of Columbia Circuit.