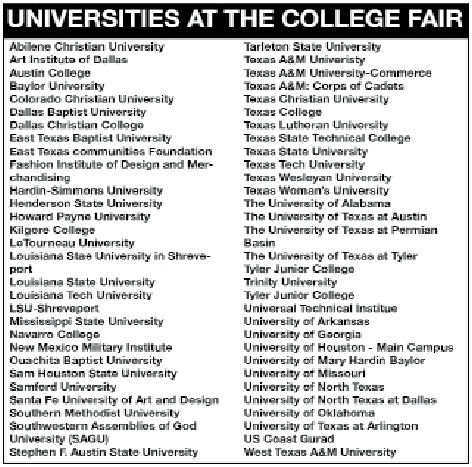 This year’s Smith County College Fair, on Nov. 8, is in a new location, and it’s going to be big.

“Instead of just TJC hosting, now we have all three major colleges here in Tyler coming together for this one event,” said Nidia Hassan, the TJC director of admissions.

Since 2008, the college fair has been hosted at TJC. While that served as a convenient location to have a fair centered on transferring students, it was becoming too small for the growing crowds. So, with effort from the Tyler Area Chamber of Commerce, UT Tyler and Texas College, TJC has managed to move the location of the fair to the Tyler Rose Garden Center.

“We sorta took it on as a community partnership, instead of having Tyler Junior College have to take the lead on it, because it is a community event,” said Christi Khalaf, the executive director of the Tyler Area Business Education Council.

Students who attend the fair can expect booths with representatives from numerous colleges throughout the country.

“Since we have additional staff, we are able to have a larger number of universities that can come. Before, we were limited to 60, but now we can bump it up to 75,” said Hassan. “In addition, we are able to have a scholarship session, which we were not able to offer before. Because of the space that we have now available, we have an actual, dedicated location for that.”

A 30-minute scholarship session, presented by both TJC and UT Tyler will be shown at three different times during the fair. The presentation will answer many of the big questions brought up about financial aid and scholarships.

“For most of the students, most of their biggest questions are about financial aid and scholarships,” said Hassan. “So, that way, we don’t have to have somebody at a table, answering the same question over and over again. This is a more formal presentation.”

The new venue will not only provide more room for college representatives, but also for students who wish to attend the fair.

“Typically, we have anywhere from 500 to 600 students show up, and that’s local high school students from the area, along with TJC students,” said Hassan. “So, this year, we’re hoping to have an even greater turnout.”