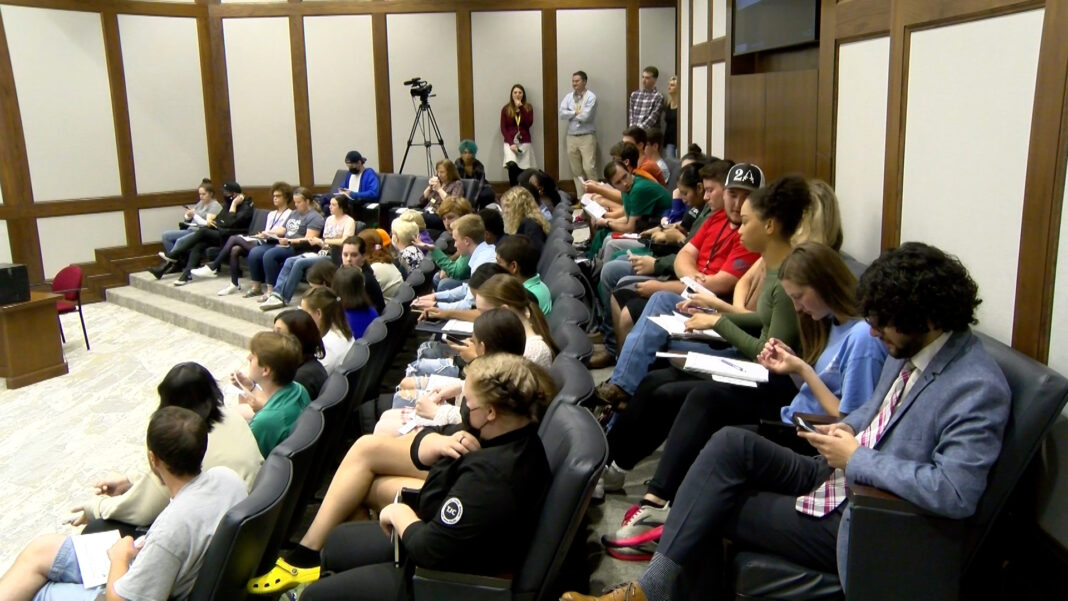 This is a developing story.

In a one vote difference, Tyler Junior College Student Senate denied the recognition of Turning Point USA as an on-campus organization.

This decision was determined by a 10-9 vote;10 against the recognition and 9 in favor. Organizations present at the meeting participated in a secret ballot. The head representative of each organization voted on behalf of said organization. Lauren Tyler, director of student life, explained, “voting with a secret ballot would allow them to vote without fear of intimidation or retaliation or anything like that.”

Dr. Amanda Jo Ratcliff, one of the faculty advisers for TPUSA, shared her initial reaction to the vote.

“Though we are disappointed by the 10-9 vote to deny the organization, we have decided to follow through with the final step of the recognition process,” Ratcliff said.

According to TJC’s student handbook, the final step of the recognition process states,”If denied, an organization may appeal the decision to the Director of Student Life.”

Connor Brown, representative of TPUSA who spoke in favor of the organization, shared his reaction to the vote.

“Well, obviously I’m disappointed, but we’ll just continue to work hard to be able to give people a safe space to communicate and get together to express their ideas,” Brown said.

Students in opposition of TPUSA expressed their opinion on the organization being denied.

“I was nervous like I was excited that we were able to stop this group from happening cause of their history and reputation, but I hope they are able to get another group like that without the reputation,” said Onyx Pirhalla, representative for TJC Pride.

This is the second time for an organization to ever be denied. The first time being the Baha’i Club 11 years ago. Karen Anglin, sponsor of the Baha’i Club, was one of the speakers who presented before the vote.

“I spent many hours preparing this speech to make sure it was clear and not misunderstood. What I am saying as sponsor of the Baha’i Club is that I believe that any student organization that meets the requirements of Tyler Junior College to form a club should be allowed to form a club,” Anglin said. “To be truly open-minded, we need to be willing to let others who have different opinions have a safe place to discuss those differing opinions.”

At the beginning of article 9 in the Student Senate agenda, “unfinished business,” the floor opened to Juliana Penny, intended chapter president of TPUSA, to discuss what the organization represents.

“Turning Point USA is a 501c3 nonprofit and educational organization founded in 2012 by 18-year-old Charlie Kirk,” Penny said. “The organization’s mission is to identify, educate, train, and organize students to promote the principles of freedom, free markets and limited government.”

During the Student Senate meeting, nine individuals spoke in favor of TPUSA and 4 spoke against. Many mentioned how the misconceptions about TPUSA revolve around how the organization is founded on hatred and is homophobic/racist.

“​​TJC has always been a safe place for me and a safe place for people in my community, but  Turning Point USA, the founders and the organization as a whole is known for having an anti-trans agenda. And as a trans person, I don’t feel safe on this campus,” Pirhalla said.

“Our issue is not with you, but with the founders of this specific organization above. It is designed to spread hate and indoctrination regardless of the intentions of members,” said ​​Jessica Sailing, TJC sophomore and representative for the Phi Rho Pi Speech and Debate Team. “We urge these potential members to form a different group, one that can run on your own terms.”

“There seems to be a major misconception on campus by many organization leaders about what Turning Point is, and exactly what Turning Point stands for and offers for college students here at TJC,” said Andre Ceasar, representative for TPUSA. “We are not a hate-based organization. We are an organization created to encompass the values of freedom and intellectual discussion pertaining to economic issues facing our country.”

This decision comes after the vote to rescind the Sept. 28 meeting after an error was found within Student Senate’s parliamentary procedure. Tyler discusses the reason for rescinding the motion.

“After looking at the recording, we found there were some errors in parliamentary procedure,” Tyler said. “So we felt as though rescinding it to vote in a different form would be the fairest process for everyone.”