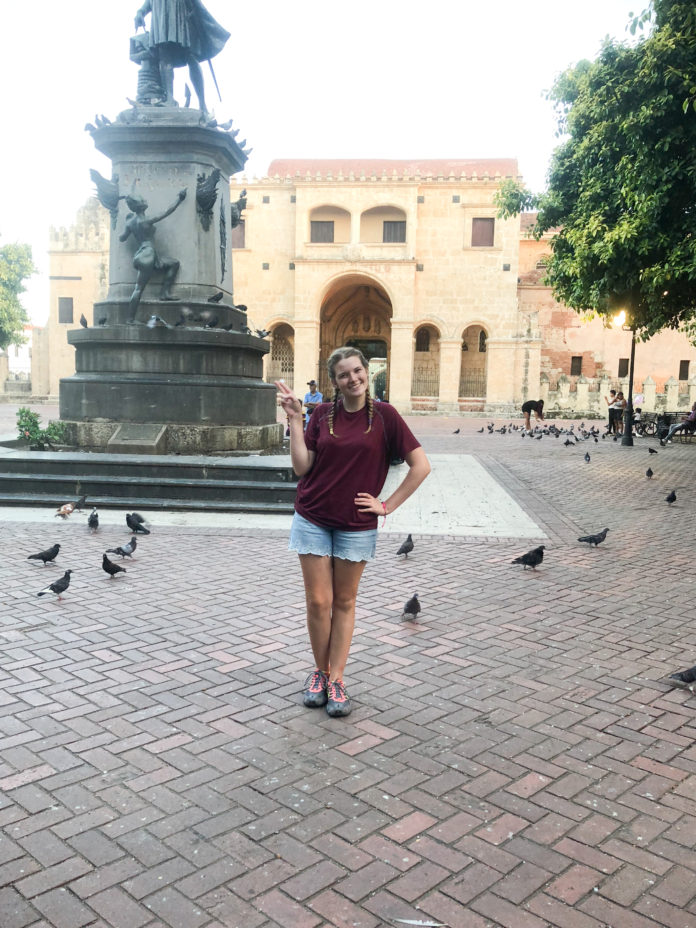 After spending a month in the Dominican Republic over the summer, TJC sophomore Hannah Sanders plans to return and continue serving others during the fall semester.

Sanders’ boyfriend, Ernesto Lluveres, is a 2018 TJC graduate who hails from Santo Domingo, the capital of the Dominican Republic.

Sanders got to know Lluveres in 2017, while he was still attending TJC. “We were in all of the same organizations, and we always saw each other,” explained Sanders. “So, we started talking, and then we started dating in December.”

Sanders met Lluveres’ parents when they traveled from the Dominican Republic to Tyler in May for his graduation. It was then that they suggested she should visit them in Santo Domingo. Lluveres’ family hosts service groups from all over the world through their company, Imagine Santo Domingo.  “They’ve hosted an array of different people,” said Sanders. “Just people who want to come and help.”

In July, Sanders flew to the Dominican Republic to spend a month with the Lluveres family. “It wasn’t just a resort vacation,” she explained. “It was actually getting to experience the culture, and the community.”

According to Sanders, it took a while to adjust to the differences between life in the US and the Dominican Republic. “Everything about it was different,” she said. “In [the Lluveres’] house, there’s no A/C … there were three days where we didn’t have water because we didn’t have electricity to run the pumps to get the water. Despite all that, they were always so happy, and so appreciative of everything that they had.”

Sanders was happy to participate in service work during her time in Santo Domingo. “Every day, we would go and feed the kids lunch,” she said. Sanders and the Lluvereses also spent time picking up trash from the beach and renovating apartments that were owned by the Lluveres family.

Additionally, Sanders had the opportunity to help a group of high schoolers from New York, who were hosted by Imagine Santo Domingo, and members of the Santo Domingo community to rebuild a park. “It was super overgrown,” said Sanders. “There was the skeleton of a swing set and a place where there probably was a seesaw, or a slide, or something. And then there were tires, and that was it … The grass was up to our knees. It was in really rough shape.”

The park’s transformation was incredible. “It was completely mowed. There was paint on all of the swing sets. There were swings on all of the swing sets, and they were installing seesaws. And it wasn’t just the group that was doing it. There were probably 40 people from the community.” The renovated park was well-received by local children. “Immediately after it was done, the kids were on it and playing!” exclaimed Sanders. Members of the community also installed solar-powered lights so that the children could play in the park after dark. “We went to the city after the group left, and when we came back home, it was 9:30, maybe 10 o’clock at night. It was pitch-black outside,” Sanders said. “All these kids [were] still playing at the park, because the lights [were] up, and they were having the time of their lives!”

This semester, Sanders is taking online classes and is planning to return to the Dominican Republic by the end of September. “I’m not entirely sure how long I’m going to stay,” she explained. “I would like to stay for the semester, but also, I will be graduating, so I’d like to be back in time to do the graduation process … I’ll probably go down there and stay for about a month again.

“Every single person down there seemed to have a genuine happiness,” said Sanders. “I think that that comes from not taking for granted the things that they have.”