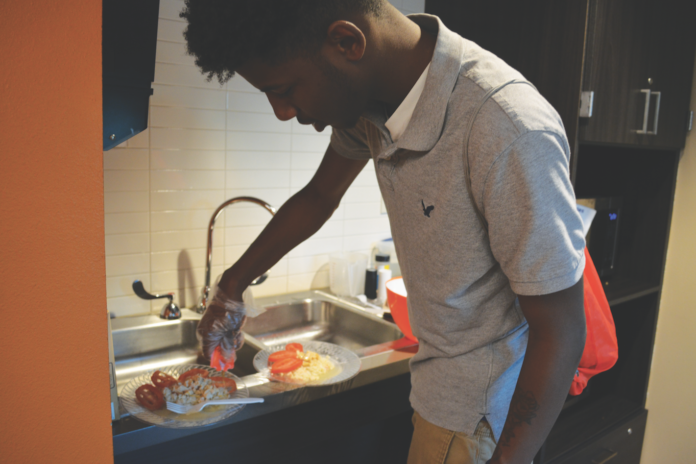 It‘s time for students to put on their aprons and show how good their cooking skills are. The Center for Residential Life & Housing hosts TJC’s first ever “Campus Chopped.”

“Our RA chair went to the Regional Leadership Conference, and schools present all the programs they’re doing for their campus. We got to talk with other schools about some fun stuff they were doing and when we were driving back I had the idea to organize a ‘Chopped,’” said Assistant Director for Residential Life Patti Light. “I wanted it to make it like ‘college reality,’ with just a microwave.”

The first round of the competition will select a chef from each hall and only four people per hall can compete. Each competitor will be provided with a basket filled with microwave-friendly ingredients that can serve a full meal.

“The competitors will all have a basket with ingredients and 20 minutes to cook, and then they’ll be judged by some student leaders and hall staff from other halls,” said Light. “The students who win will go to the finale.”

The finale is scheduled for April 3, in the Apache Rooms at Rogers Student Center,   with a grand prize of 100 Apache Bucks. There will be 10 chefs, one from each hall. They will be challenged to do the ‘traditional chopped chef’ and prepare an appetizer, an entree and dessert.

“The first two times we’ll cut four chefs, so the desert round will determine who wins,” said Light.

Crossroads was the first dorm to compete, on Monday, March 20. Resident Carlos Johnson was the winner of the round.

“Actually, my dad is a chef. He owns a restaurant in Troup Road, Louisiana called Crescent City Bistro. I’ve been in the culinary arts my whole life, and I felt like this contest was for me,” said Johnson. “It’s in the bag, it’s mine.”

Chefs are supposed to meet at the main lobby of their dorms at 6:30 p.m. and wait for instructions from Patti Light. Vaughn and Holley Hall had their contest on Tuesday, March 21 and Ornelas Hall on Wednesday, March 22. The following schedules for the next halls to compete are as followed: Bateman Hall- Monday, March 27; Wesley and Hudnall Hall- Tuesday, March 28; Claridge and Sledge Hall- Wednesday, March 29.

If interested in participating, email rha@tjc.edu for more information or go to the housing office to sign up.