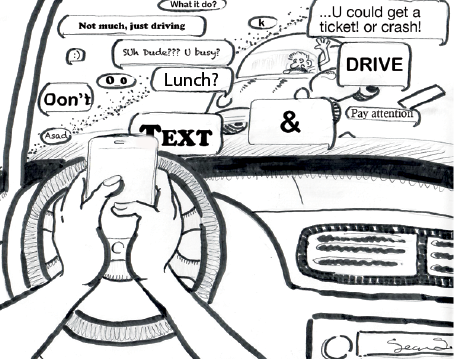 Texting and driving is a dangerous and deadly version of distracted driving. One horrifying fact behind texting and driving from Edgar Snydar and Associates, a law firm from Pittsburgh, states that one out of every four car accidents is caused by texting and driving. Texting and driving is six times more likely to cause an accident than driving drunk. Texting while driving causes a 400% increase in time spent with eyes off the road. Answering a text takes your eyes away from the road for an approximate five seconds. Traveling 55 miles per hour in that time is equivalent to driving the length of a football field.

Texas is one of four states to not have a ban on texting and driving. For the fourth time, however, the Texas Legislature is trying to pass a bill that would make texting while driving illegal in the state. On Thursday, March 16, the Texas House voted 114-32 to pass the legislation. If the bill goes through the rest of the process to become a law, the punishment for the offense would be a fine ranging from $25-$99, with penalties up to $200 for repeat offenders.

It is important to see the government try to put an end to this. The state officials know there is a problem on this front and this bill is a first step to eliminating this threat on the road. The problem that law enforcement would have with this is that there really is no way to enforce the bill. Just like driving without a seat belt, if an officer sees someone on their phone, all they can really do is give a ticket. After that, the driver can go right back to being on their phone.

The bill, House Bill 62, was written by former House Speaker Tom Craddick. While most have seen this as a step forward, some politicians do not see this view. Take Democrat Harold Dutton Jr. of Houston for example. “How in God’s name would an officer know you are texting,” Dutton Jr. says. Following it up with, “I think this bill falls short of where this Legislature can get to in terms of texting and driving.

Yes, it will be difficult for officers to know who exactly is texting and driving. Maybe the bill should include all forms of distracted driving. Then it would be easier for an officer to notice those who are not paying full attention to driving. Like it was stated earlier, this will most likely be handled like driving without a seat belt, but it also may be patrolled like it as well.

The government has taken the first step, now it is time for civilians to step up and do their part. If you are a passenger, request to text for the driver if it is that important. If you are alone and need to use your phone for any reason, simply pull over on the side of the road and do what you need to do, then safely get back on the road. It may seem like a stretch to abolish texting while driving completely, but Rome wasn’t built in a day.