The things they lost in the fire 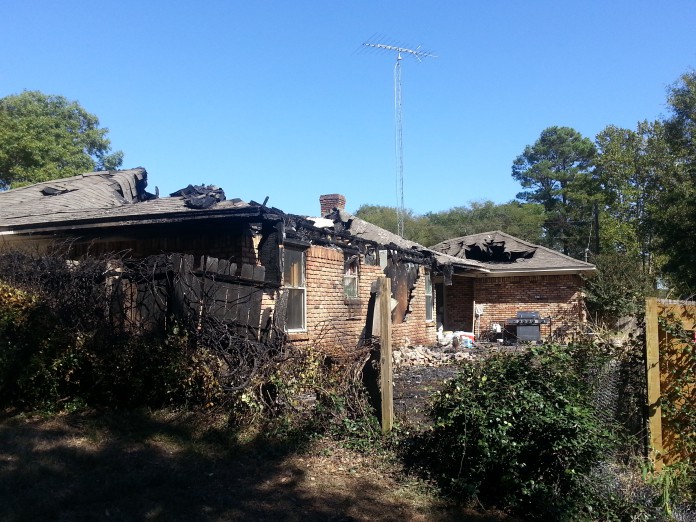 They say that you never know what you have until it’s gone, or in this case, until just about everything you own unexpectedly burns to the ground.

Don Fraser, the Director of Alumni Affairs at TJC, and his wife Donna received the news that their 2700 square-foot home nestled in between a 15-acre tree farm just north of Big Sandy was burning at about 9 p.m. on Oct. 13.

“Mr. Fraser, you need to come home as soon as you can get here. Your house is on fire,” a neighbor said frantically over the phone.

Don was headed home from Athens after having dinner with friends. Donna was working at the Prep Home, a non-profit organization that the Frasers founded several years ago. Neither Don nor Donna had a chance to prepare themselves for the catastrophe that was unfolding.

The Frasers arrived at their home, greeted by seven fire trucks from five different departments in the surrounding area, as firefighters struggled to fight the flames and recover as much out of the house as possible.

The fire swept across the house, burning almost everything in it’s path. Firefighters wielding water hoses soaked the flames as the roof began to collapse.

“When we arrived the entire attic had burned up from right to left,” said Gilmer firefighter Colby Lewis.

Investigators would later conclude that the fire was started by an electrical short in the attic of the house, most likely caused by rodents.

Three large pieces of furniture and much of Don’s collection of antique military weapons were among some of the more notable things rescued early on.

Don made a phone call to a member of his Sunday school class informing him of the situation. By 10 p.m., over a dozen people made their way from Tyler to help the family recover anything that they could salvage.

“That just makes you feel really good that people that know you would pack up in the middle of the night and come driving up just to see if there is anything that they can do to help,” said Don Fraser.

The Frasers moved to East Texas in 2013 after spending 18 years in Arizona. Don is a retired Naval Airman who served for 16 years before accidentally getting hit by a bus in Orlando, which led to his medical retirement from the Navy.

Having served for so long in the military, Don had accumulated numerous awards, plaques and medals which he kept primarily in his home office. Now, he had only the memories to remember those moments. There are no more mementos, pictures or accolades to remind him of his achievements.

“We cried over one thing and not a single material thing. We lost our little Pomeranian puppy,” Fraser said, “four and a half pounds of love.”

“The only thing you can’t replace is the one little guy who was alive. Those are things that really matter in life.”

The Frasers began doing charity work years ago in Arizona, assisting police and the FBI in rescuing girls who were victims of sex trafficking in the United States.

When the Frasers lived in Arizona, they founded a non-profit organization called Street Life. Street Life was a place for minor victims of sex trafficking, who had been abducted and forced into prostitution, to recuperate and begin transitioning back to a normal life. However, when female victims turned 18, the state would no longer pay for the organization to take care of the girls. So when the Frazer’s moved back to Texas, they opened up the Prep Home; “a faith-based college dorm and transitional living program that assists victims of sexual exploitation and trafficking restore normalcy to their lives” and begin working toward a degree.

The Prep Home is located at an undisclosed location in East Texas and currently houses four girls who were once victims of sex trafficking, now working to complete a degree in order to take care of themselves.

“Education is a major answer to things. If these girls can get an education, they have the ability to support themselves and there is no way that anyone will be able to get them back into prostitution,” said Fraser.

Don is currently a doctoral student, going to school to obtain his Doctorate of Education, a degree that requires a lot of time and research. His research for the last two years was located primarily on an external hard drive that was located somewhere in the house before the fire.

For nearly three days, Don and a group of close friends sifted through over three feet of debris in search of the hard drive when someone finally pulled it out of the ashes, unscathed.

After spending an entire week at the scene of the fire trying to recover anything that they could, the Frasers had done enough digging. It was now time for the insurance companies and contractors to take over. Don returned to TJC a week after the fire, hoping to restore some normalcy to his life.

“When you see 60 years scattered into the rubble that was once your home, it’s easy to get upset,” said Fraser.

As of Oct. 28, all contracts for the new house had been approved to begin the rebuilding process. The couple is optimistic about the future, hoping to be moved into their new home in 6-8 months.

Construction of the new home is soon to be underway, and the Frasers are happy about the future and thankful for all of the love and support that they received from people all around TJC.