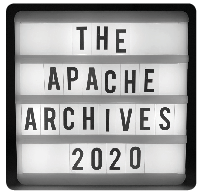 Apache Archives is a recurring historical article featuring a timeline of anniversary events for a week. There will be a weekly spotlight interviewing TJC faculty and students or community members on the impact of a highlighted historical event.

Waco siege still leaves a mark, decades in its wake

From Feb. 28 to April 19, 1993, a standoff ensued between the Bureau of Alcohol, Tobacco and Firearms, working with the FBI, and a religious sect called the Branch Davidians near Waco, Texas. By the end of the 51-day siege, the sect’s compound at Mt. Carmel burned to the ground; nearly 80 men, women and children were found dead, according to the Encyclopedia Britannica.

According to the Gospel Coalition, the Branch Davidians were a splinter sect of the Seventh-Day Adventist Church. They were eventually led by a man named David Koresh (born Vernon Howell), who took several wives within the sect, some of whom were minors. Koresh claimed to be a modern prophet and persuaded the group to build an “army of God” in preparation for the apocalypse. The Branch Davidians then began stockpiling weapons, which alerted federal authorities.

The siege began when 70 ATF agents attempted to carry out a search warrant on the Mt. Carmel compound. A gunfight erupted and four federal agents, along with six Branch Davidians, were reported dead. In the following 50 days, authorities communicated with Koresh in an attempt to persuade the Branch Davidians to leave the compound. The final assault on the compound involved the use of tear gas to draw members out of the building; however, several fires erupted and the entire compound was engulfed in flames. Along with those who died in the fire, investigators found nearly 20 Branch Davidians who died from gunshot wounds, including Koresh.

Smith County Sheriff Larry Smith, an ATF agent during the Waco siege, shared his experiences during the 51-day standoff.

“My role was that of operating a Bradley armored vehicle and later as liaison with the Texas Rangers,” Smith said. “My initial reaction was like anyone else in law enforcement – what can I do to help the situation?”

The causes and ethics of the siege are still disputed 27 years later. Some criticize the actions of federal authorities, while others believe the Branch Davidians’ activities warranted federal intervention.

“Things could have been done differently in retrospect, but hindsight is 20/20,” Smith said. “History is always important to look back on. One of the reasons is to ensure we don’t repeat history, but learn from it.”

Koresh is buried in the Tyler Memorial Park Cemetery and Mausoleum. The grave was initially unmarked, but a granite marker was later placed at the site. Additionally, the still-occupied Branch Davidian compound and the remains of Mt. Carmel center can still be visited today.