TJC Art Club makes a student king for a day 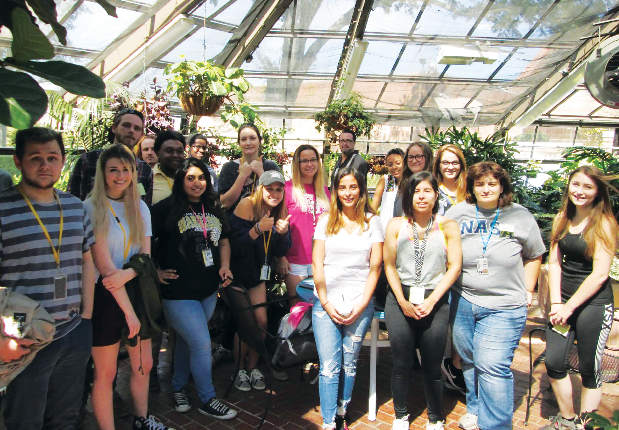 With all the negativity in the world today, TJC Art Club students decided that the world could use some changing. On Wednesday, Sept. 28, Art Department Chair Derrick White sat before his students and proclaimed that they were going to do exactly that.

White began the meeting by presenting a clip from the television show, “The Office.” While the clip may have been humorous, it helped set up the point White wanted to get across at the meeting. In this clip, office members played a race- and religion-guessing game.

While diversity is something to celebrate, White feels that people should also celebrate the similarities everyone shares.

“It’s time we started seeing each other as people,” said White. “It’s a pretty daunting task to try to change the world for the better, and it can’t be done overnight. I thought that what we would do is start by changing the world for one person. We’re calling this ‘King for a Day’.”

The idea of being a king for a day was inspired by White’s wife.

White’s wife had given a local homeless man her phone number and had told him to call if he needed help. She had seen him in a parking lot pushing a shopping cart, so she decided to see if he was hungry and took him to a fast food restaurant. A few weeks later, her phone rang, and it was the man she had helped. The man named Joseph, asked if he could have help paying for his motel room. So like she had promised, White and his wife helped him out.

More inspiration came from an idea that White and Art Professor Paul Jones had a few years ago. If possible, they wanted to take a random stranger and reward him or her with gifts.

“I want our art club meetings to be exciting and entertaining, but I want our activities to be meaningful and worthwhile as well,” said White.

White told his students that they were going to go out, find a random student, and introduce themselves. Then they would treat that student to Starbucks and take him or her to the campus store and buy that person a shirt.

“At first I think we were all a little reluctant to go up to a stranger and try to change their day for the better. But by the end of the experience, we were all in a really great mood.” said Jerri White.

Art club members left Jenkins Hall and found student Amanda Hodson. As White had said, they took her to Starbucks and bought her a coffee, took her to the campus store and bought her two TJC shirts. They took her to the honors lounge on the third floor of Rogers Student Center and got her a cookie and ended it with a tour of Vaughn Conservatory. They invited Hodson back to the art lounge to kill time before class and she gladly accepted.

“Amanda reacted pretty well to the ordeal. Of course, there was the initial awkwardness, but it didn’t take long for her to warm up and start up conversations with us all,” said Jerri White. “Random acts of kindness might not always lead to friendships, but I think this one did.”

Although the students didn’t change the entire world, they did make Amanda’s day, along with their own, much better.

“It’s easy to feel you won’t really make a difference. Your actions will matter to people and it will make a difference to them,” said White. “I don’t know if changing the world is possible, but I do know being kind is worthwhile and feels better to me than resentment and hate.”

White hopes that after this experience, students will be more willing to perform random acts of kindness themselves.

TJC students can help change lives too. The Art Club’s annual canned food drive will run through the 28th of October. Students can bring canned food and other nonperishable food items to the art lobby located in Jenkins Hall.