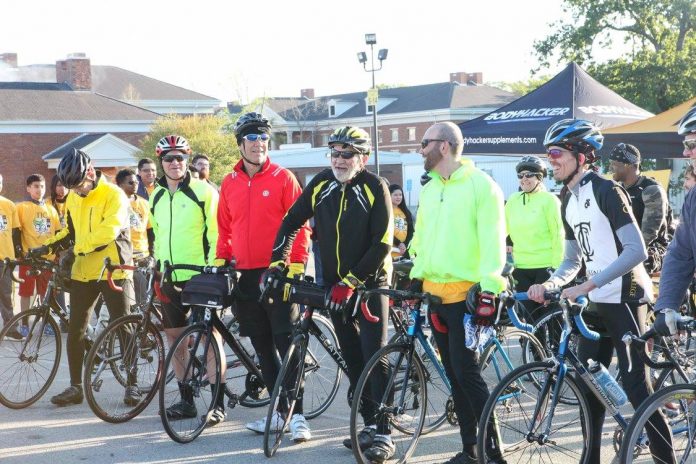 Tyler Junior College has another accomplishment under its belt.

What was once just a school with only 93 students and 9 faculty members is now one of the largest community colleges in Texas. Established in 1926 as part of the Tyler Public School System, TJC allowed Tyler residents to have access to higher education. Although TJC faced a declining student population due to the Depression, the school had a major change in the 1940s. In 1945, Tyler voters approved a measure to create a junior college district and the College received $500,000 in bonds.

“I think it’s remarkable that TJC has come so far since 1926,” TJC President Dr. Mike Metke said. “We have a great history and such a promising future for our students.”

Earlier this year, TJC kicked off the 90th anniversary with the “90 for 90th”- a two-day, 90-mile bicycle tour spanning the length of TJC’s enrollment district led by Metke, who is also an avid cyclist.

In May, TJC held commencement ceremonies in which Metke and the TJC Board of Trustees led the procession of graduates into Wagstaff Gymnasium while Amy Cunningham, president of the TJC Alumni Association, gave the alumni salutation.

Events will continue to be held throughout the year, celebrating TJC’s history and accomplishments, and aim to bring together current students, alumni, past and present employees and board members.TJC’s Weeks of Welcome, starting on August 15, even has a few events dedicated to the College’s achievements.

“Not only will there be a ’90’s themed football pep rally dedicated to TJC’s 90th year, but there will also be a showing of the ’90’s classic, The Lion King,” said Eric Book, recreational services coordinator for the Center of Student Life and Involvement.

Both events, located on Jenkins lawn, are scheduled on August 26.

TJC has since been a more diversified junior college, with 78 degrees and 43 certificate programs. The College is also home to a diverse group of alumni, anywhere from athletes to politicians, and even actors to business leaders. Notable alumni include Chicago Bulls’ Jimmy Butler, New York State Senator Terry Gibson, Boardwalk Empire’s Judson Jones, former Chancellor of Vanderbilt Joe Wyatt, and many more.

“There’s a reason why TJC is one of the best junior colleges in Texas in my opinion,” Beth Higgins, who graduated in 1983, said. “The professors want to see you succeed and for my daughter to graduate from [TJC], it just means we will be able to carry on the traditions.”