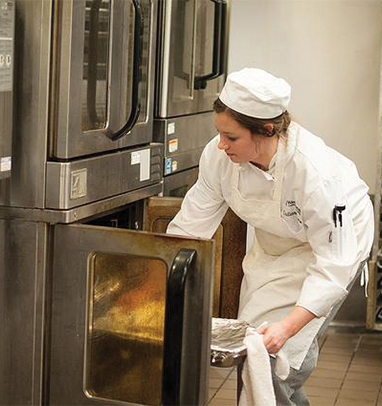 Tyler Junior College is working on adding a culinary arts program to the school. The school was approved to start the program by the state earlier this year. The administers are currently developing the curriculum for the program. However, the process of developing curriculum for a program is extensive

The first step is to determine the type of program that is going to be developed. There are two types of programs at Tyler Junior College. There are programs that the school calls AA or AS degrees, which stands for Associates of Arts and Science which are governed by the rules in the Academic Course Guide Manual.

Then the school has what they call AAS degrees which stands for Associates of Applied Science and they have certificate programs which are governed by the rules of The Guidelines for instructional programs in Workforce Education (GIPWE) and the Workforce Education Course Manual (WECM). Different programs follow different state rules, for instance, the AA and AS degrees are considered academic transfer degrees for students who are going on to four-year universities for Bachelor’s degrees after leaving TJC. The AAS or Certificate programs are for students that are planning on going directly into the workforce after leaving TJC.

Culinary arts are a workforce program that will be categorized as an AAS degree and will have two certificates from the program. There must be an advisory committee who are made of people that work in the workforce in this area. These people must say that they have a need for the program and they need skilled workers in a certain area and that they need TJC’s help in providing the training.

“That is really the driving force in a work-force program is the advisory committee because they are the people who are doing the jobs day to day and that’s what culinary came out of,” said Curriculum Development Director Billie Anderson. Anderson has previously worked on the school’s Dental Hygiene program.

“That was my first year in the office so I was a little nervous but I am very proud of the program, However, I am never the only person that works on a program. The department chairs are involved in it as well as the faculty so it’s not a matter of me sitting down and saying this is what needs to be in this degree plan. It is the teachers and department chairs that really design the program, I just give then the guidelines,” Anderson said.

TJC is currently working on getting a new program approved by the state called Industrial maintenance on top of the culinary arts program.

“Any changes within an existing program has to be reported to the state and that is what takes up the majority of our time in this office. I work with Jaquitta Bol who is the curriculum specialist at TJC who assists me in putting all the documentation together and getting everything approved at the TJC level,” Anderson said.

Everything is presented to a curriculum instruction committee who reviews the curriculum and votes on it. If it is approved then it goes to the Vice-President for Academic and Student Affairs Juan Mejia for approval. However, if it’s a new program then it goes to TJC President Mike Metke for approval. The TJC Board of Trustees must make the final approval for the program to go on to the state level.

“It is only after all these steps are passed that we can submit the program to the Texas Higher Education Coordinating Board (THECB) and we still have to present it to our accrediting agency the Southern Association of Schools and Colleges Commission on Colleges (SACOC),” said Anderson.

Anderson said that for a new program there may not be as many faculty members working on it and that the school will sometimes use existing staff to “co-teach” classes. However, culinary arts require new staff as it is a new endeavor for the school.

“We had to contract with people out in the workforce to talk to them about what the curriculum needed to look like because we don’t have any culinary faculty,” Anderson said.

The final decision is still pending, but the school hopes to start the program as soon as Fall of 2018.