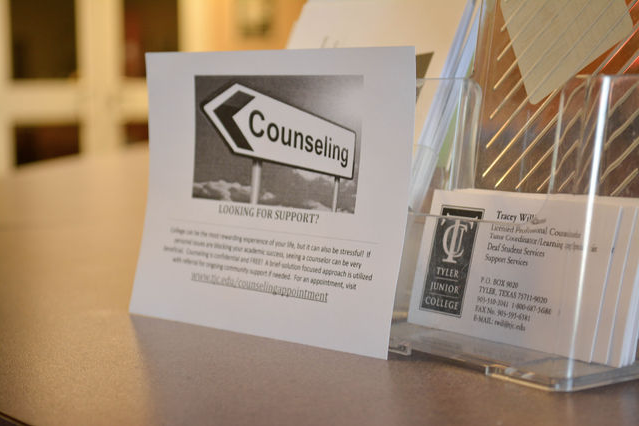 In the United States 11.2 percent of all college students will be sexually assaulted sometime in their college careers according to RAINN, an anti-sexual violence organization. This is why it is important for students to know the resources available to them on their college campus.

When sexually assaulted on campus the first thing available to a student is the option to call the campus police emergency number at 903–510–2222. An officer is available day or night to assist students.

Campus police were not available for comment on what specific first steps are taken with a student who has been sexually assaulted. However, pamphlets and additional informational sheets are available upon request at TJC Campus Police headquarters.

Tracey Williams, who is a Licensed Professional Counselor (LPC) at TJC is one of the voices a student might hear after seeking help after a sexual assault.

Whether a student chooses to report the assault or not, the student has the option to make an appointment and seek help for the mental trauma that occurs with having been sexually assaulted.

“So the services that I provide in this office are counseling services or mental health services. And if they would like to make an appointment then we make an appointment. We try and get them in as quickly as possible. I mean, that would be considered prioritized case, said Williams.

A student is able to make an appointment with Williams through the counseling page on the TJC website. Additional numbers for resources such as the Andrews Center (903-597-1351) and the East Texas Crisis Center (903-595-5591) are also available on this page.

Another option students have is to contact Andrew Cantey, Title IX coordinator at TJC. Mr. Cantey was also not available for comment.

For students who are not familiar, Title IX of the educational amendments of 1972 states, “No person in the United States shall, on the basis of sex, be excluded from participation in, be denied the benefits of, or be subject to discrimination under any educational program or activity receiving federal financial assistance.”

This means that a student has the right to report an assault and have appropriate investigative actions taken by the school.

Even if a student chooses to also report to local authorities and have a criminal investigation conducted, this does not mean that the school is relieved of it’s own investigative duties into the case.

TJC provides resources for students such as mental health support, investigative services, and academic resources that can be provided to a student based on specific needs and circumstances.

“Education for the victim should go without question. But I think that something else involved there is that there should be education that is targeted towards the friends of the victims,” said Ryan Button, a professor of sociology at TJC. “To understand that there are options, but also to understand how to address those options under that context.”

Friends of victims can also be aware of sexual assault resources on the TJC campus to better ensure that victims receive the support and help they need in a time of crisis.

The Policies page on the TJC website has a portion specifically dedicated to sexual assault. When referring to the time after a student has made a report the page states,

“Any sex-related offense (forcible or non-forcible) alleged to have been committed by a student will be investigated by Campus Police. Campus Police Officers will investigate and take action on violations of federal, state, and local laws.”

Four out of five students choose not to report their sexual assault according to RAINN. Even if a student chooses not to report a sexual assault, finding help physically, mentally, and academically is an important step on the road to a victim’s recovery.