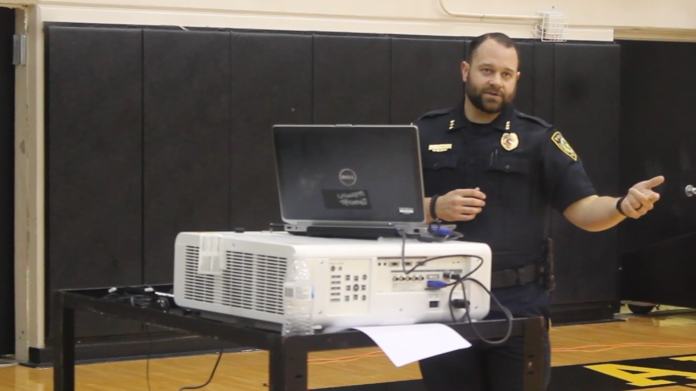 On April 23, TJC held an event known as the Light the Night rally in the at 5:30 in the Wagstaff Gym. The rally was to raise awareness for sexual assault and to educate students on other matters of campus safety.

April is known as Sexual Assault Awareness Month, so the event focused heavily on dealing with sexual assault on the medical and law enforcement side. the event was full of various different speakers from different backgrounds. There was a representative from the East Texas Crisis Center, as well as a Nurse trained to examine patients who have experienced sexual assault.

There is a long process that nurses have to go through in order to properly examine a sexual assault victim. the nurse will do things such as swabbing their mouths and bellybuttons for DNA samples. Testing a sexual assault victim is not exactly like what is portrayed on shows like Grey’s Anatomy. While the nurse does swab the patient, they do not always take pictures and they use cotton swabs to collect the DNA samples. the nurse even mentioned how some patients will take the samples themselves. Not all rape kit results are reported to the police. patients can choose to not have the results reported to the police.

Rape kit testing is free to the patient, there are limits to how much state funds cover it but a person can get tested for free. It is very simple for a nurse to become certified as a forensic nurse. this is due to the fact that hospitals are in dire need of those type of nurses. You have to be a Resident nurse for at least two years to qualify for the certification.

When it comes to the law enforcement side of investigating sexual assault, there is a lot that detectives have to do to help get justice for the victims. Detective Kevin Fite and his partner Michelle Brock were invited to speak about what they deal with in their division of the police department. Fite and Brock work in the Major Crimes Unit in the Crimes Against person division of the Tyler Police Department. They mostly deal with cases of physical abuse, sexual abuse, and child death.

According to Detective Brock, The police can use a database called CODIS (Combined DNA Index System) to match up DNA of offenders. CODIS is a database used by the government to input DNA. the detectives will request to get a sample from a suspect and then they send it off to a lab to compare DNA samples. It takes about six months to a year to get the comparison done.

“it is very frustrating on the investigator side of things because we have a victim there, and that legitimizes their victimize when we get the DNA back. I can’t imagine all the turmoil that they are going through waiting for confirmation that they were sexually assaulted, ” said Detective Brock.

the Tyler Police Department handles a estimated 50-60 sexual assault cases a month. This doesn’t even include all of the other victims that don’t come forward.

Active shooter situations can turn deadly if everyone doesn’t know what to do protect their lives. Seale stressed the importance of using the RUN-HIDE-FIGHT method.

Seale also spoke about how practical it is to use the RUN-HIDE-FIGHT method at a campus like TJC. Due to the fact that TJC is separated different buildings, it is hard for the campus to all go into lock down at the same time.

Seale also went on to explain what a person has to do when they encounter police during a active shooter situation.

“Whenever police come in the school, you need to follow their instructions and make sure everybody shows them your hands. This is what kills us: our hands. Make sure you have your hands where we can see, otherwise you can become a victim,” Seale said

“Do not leave your safe area to pursue a threat that is not your responsibility. Your responsibility is to keep yourself safe. We don’t not want you to chase to shooter and possibly become a victim or we are coming down the hallway and we think you are the shooter,”Seale said.

the event ended with a special self-defense course by Dean of Academic Success Dometrius Hill. He and his wife showed all of the event attendees the basic moves for self-defense. They also spoke about what students can do to keep themselves safe, such as not going out alone at night.

The Light the Night Rally was a wonderful event that was jam-packed with giveaways, free food and amazing speakers. Hopefully many of the attendees left the event more knowledgeable about sexual assault, active shooters and self defense.