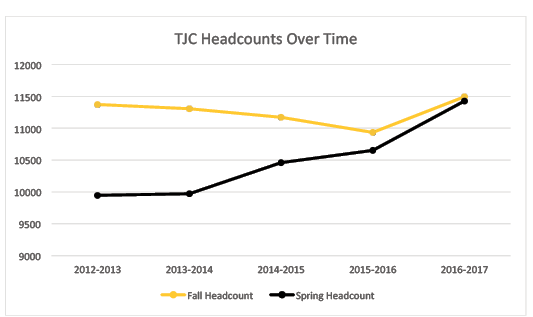 Along with TJC’s 90th anniversary, there are even more reasons to celebrate. Spring semester enrollment for 2017 broke a record compared to the spring 2016 semester. With a 7.3 percent increase, there are now 11,427 Apaches.

Students who seek to further their education for approximately one-third of the cost of a four-year institution have Tyler Junior College, one of the premier community colleges in the nation, as one of their best options.

“The most important thing, and this really is from nationwide and statewide, there’s an increased sensitivity to price,” said Executive Director of Marketing, Media and Communications Kimberly Lessner, “and when you look at the value that TJC offers, the return on investment dollars, you know, if a student or parent pays for a degree from TJC it’s going to return on investment multiple times over, and that with one-third of the cost of a four-year university.”

According to Rebecca Sanders, director for public affairs and media relations, the enrollment increase can also be attributed to the fact that TJC offers over 120 degree programs and many opportunities for scholarships.

“I think the Promise program will also enable us to grow more. With so many students signing up now and making that commitment, knowing that when they complete their high school education, they can come to TJC virtually tuition-free, so I really think that will boost enrollment,” said Sanders.

In addition, TJC is now recognized as a baccalaureate-granting institution by the Southern Association of Colleges and Schools/Commission on Colleges. The school started offering baccalaureate degrees in dental hygiene and is also the first community college in the state of Texas authorized to offer a Bachelor of Science degree.

“The new programs that we’ve developed, Vet-Tech, our baccalaureate degree in Dental Hygiene and the fact that the college is now a baccalaureate-granting institution, that status level brought in additional credibility that can only be shared by three other colleges in the entire state,” said Dr. Juan Mejia, Provost & Vice President for Academic and Student Affairs.

Rebecca Sanders also claims that TJC has a differential when it comes to faculty. The size of the classes and quality of the instructors also had a great impact on the increase as well.

“I think all the faculty and staff are dedicated to see students succeed, professors know their students’ names because they care about them and they care about you being successful in your educational growth and then beyond,” said Sanders.