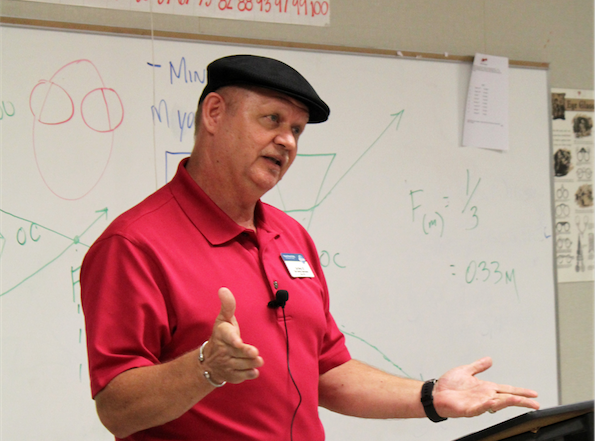 On a wall in TJC’s West Campus, a banner rests, hardly large enough to showcase the many ToastMasters award ribbons it boasts.

For the past several years, Tyler Evening ToastMasters, a local chapter of ToastMasters International, has provided a safe, welcoming environment for people interested in gaining public speaking skills.

“Just being at ToastMasters has helped me to, you know, use different techniques,” said Calvin Sims, president of Tyler Evening ToastMasters. “Breathing, just relaxing, and taking my time with a speech, and overcome my anxieties.”

Sims has been a member of Tyler Evening for four years, although he was absent for some time when he battled colon cancer, which he won after six months. After returning in February of this year, Sims was elected president of the group.

“I’ve been in sales for a long time. It’s pretty easy to speak to people one-on-one, but I always had a lot of fears of when I’d be called upon to get in front of a group of people and do a presentation,” said Sims. “A lot of nervousness, apprehension, that type of thing.”

ToastMasters International is a non-profit organization with one goal in mind: effective communication.

“Leadership, and life, is all about communication, really. If you can communicate effectively, you’re gonna be able to do your job a lot better,” said Sims.

Sheikh Cham, a member for five months, has used his knowledge from ToastMasters to improve communication in his own local organization.

“I see how they do things there, then try to bring that to my organization, Tyler Gambian Alliance,” said Cham.

Originally from Gambia, Cham has been in the United States for what will be seven years this December. He is the treasurer of Tyler Gambian Alliance, and is a former student from TJC.

“ToastMasters is just a very good experience for me,” said Cham. “It’s not just you trying to do things by yourself, everybody’s helping you, and you don’t need to rush. It’s not like a semester of lecture class where you have to worry about your grades- no, there, you go by your own pace.’

Unlike a college course, ToastMasters offers a relaxed type of speech organization where members are encouraged to go at their own pace. For about $40 every six months, new members are provided with two manuals as guidelines, one for communication and one for leadership. The two manuals are intended to be used at the same time.

“Wherever you’re at, the goal is to improve your speaking ability,” said Sims. “Most people are like I was- just starting out, and you just want to be able to speak better in front of, you know, at work, or a Sunday school class, or just communicate better with your family.”

Patricia Montgomery, or Pat, as they call her, a member for six years, is a retired bank examiner, which required frequent uses of public speech.

“I heard about it for many years, but I joined it because, for 32 years, I was making presentations,” said Montgomery. “Once we went into a bank and we audited the bank, we had to write this report, and this report had to be presented to our superiors first, and then it had to be presented to the board of directors for the bank. But I was never comfortable- you never get comfortable with speaking for a group.”

With each ToastMasters meeting, there are usually two main speakers with prepared speeches, but other members also have chances to speak to the group.

“We want everybody speaking in some way. If you’re not giving a speech, you have a duty,” said Montgomery.

At each meeting, members are assigned specific duties to fulfill. The “Ah Counter,” for example, tracks all filler words used during the meeting, and announces how many slipped out by the end of the meeting.

“One of the biggest benefits, at least one of the biggest benefits for myself, is that they draw attention to whenever you use a filler word,” said Jon Kavanaugh, a ToastMaster for two and a half years. “And so, participating in conference calls, I would hear so many ‘um’s, ‘ah’s, it drew attention to me, that I would make sure to stop, or try to limit it and make sure I don’t do it myself.”

Jon Kavanaugh works out of Kilgore, and has a Ph.D. in electrical engineering. After being a part of ToastMasters for some time, Kavanaugh began participating in meetings and conference calls with more confidence, and fewer filler words.

“My supervisor informed me that it drew attention to me – attention in a good way – in that I was representing myself as a highly intelligent individual.”

Kavanaugh is a mentor for high school students in Team America Rocketry.

“Area high schools who are competing would contact me and ask me if I could come and speak about the program to the students – give a presentation,” said Kavanaugh. “Prior to joining ToastMasters, I would have probably winged it, giving a presentation like that. I probably wouldn’t have put together a powerpoint presentation.

New members are encouraged to give an Ice Breaker speech about themselves so that the group can get to know them, and so that they are aware of how well they can speak before beginning the course.

“The reason they want it to be about you is because you know more about you than anybody else,” said Lester Warburton, who has been a member for about four years. “So, if you’re doing a speech about yourself, you will not need any notes.”

Warburton uses his skills from ToastMasters to aid him in pursuing his job at Stream Energy.

“By your fourth, maybe fifth speech, you’ve got your basics, more or less, that you’ve covered,” said Warburton.

Adrian Dunklin, a member of ToastMasters since 1983, originally joined because he was somewhat pressured into being a weekly speaker at his Sunday School.

“I was so nervous, because I’d never done that before. I decided, then, that I must get in ToastMasters to overcome my fear of speaking in front of an audience,” said Dunklin.

Dunklin has been a member of several ToastMasters clubs across Texas. Being a member for 33 years, he has picked up most of the important techniques.

“You’ve got to really get that subject that you’re gonna talk about in you to get it out to people,” said Dunklin. “If you don’t get it into you, then you’ll have some difficulty getting it out to the public.”