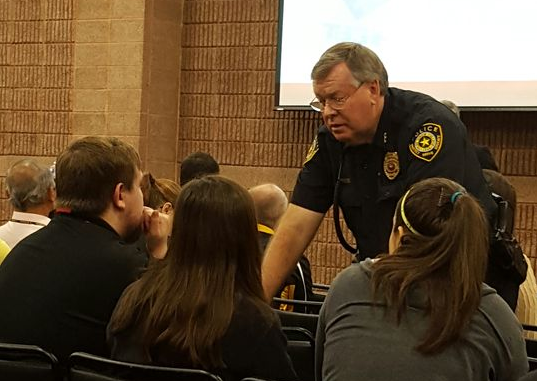 “I’ve been in an active shooter situation at the courthouse when the shooter was there. We were in the courtroom that he was shooting at,” said Renee Hawkins, division director for student support services, who attended the Active Shooter Training held at TJC. “Nobody expected anything to happen that day, so no one was prepared.”

Hawkins is a survivor of a shooting that happened at the courthouse in downtown Tyler Feb. 24, 2005. Four wounded and three died as a result of the incident.

At the entrance of the Apache Rooms were two tables where students and faculty signed in to attend an active shooter training by TBG Solutions Oct 19. Inside the room people greeted each other with smiles and hugs. Talking and laughter echoed throughout the room as the crowd found their seats. The noise died away as Mark Seguin, CEO of TBG Solutions, greeted the audience.

“The goal of this training is to make you aware and to empower you, so that you don’t have to be a victim,” said Seguin.

The audience repeated several times during the training, “The body cannot go where the mind has never been, failure to plan is planning to fail.” The sad truth is that an active shooter situation is a clear and present danger. It has become necessary to hold a training to prepare students for such an event. One-hundred and thirty-six active shooter situations have occurred in the U.S. this year alone. Since the beginning of this semester, three instances of crimes involving gunmen have taken place at TJC.

Seguin called four volunteers to the front. The scenario was there is an active shooter in the hallway what do you do. Immediately one of the volunteers, to the surprise of the audience, lifted the speaker’s podium. Water bottles, papers and pens from the podium scattered across the floor. With the podium lifted in the air he sprinted to the door. The crowd erupted with cheers and  laughter.

The podium landed in front of the door with a crash.

The other three volunteers grabbed the sign in tables out from under the people sitting at them and slammed them in front of the door. They did what they were trained to do; barricade the door to prevent the shooter from entering.

Seguin presented videos and case studies of prior active shooter situations, such as the Luby’s massacre and the Columbine shooting. Audience members diligently took notes and copied statistics and information presented in the slides.

The idea that students and faculty can take an active role in preventing or stopping an incident was encouraged.

“You are the security system. You are the camera system. The police’s ability to stop an incident depends on you,” said Seguin.

“No single response fits all active shooter situations; however making sure each individual knows his or her options for response and can react decisively this will save valuable time. Depicting scenarios and considering response options in advance will assist individuals and groups in quickly selecting their best course of action. Training provides the means to regain your composure, recall at least some of what you have learned, and commit to action. There are three basic options: run, hide or fight,” stated a slide attributed to Homeland Security.

“You have comfort in knowing that on the law enforcement side we have trained we have planned, in case something happens,” said Chief Melton.

Attendees left the training better equipped for an emergency situation.

“The training that we had today to tell you about how to prepare how to think about the situation and to know what the police are going to be doing in the situation too was very helpful,” said Hawkins.