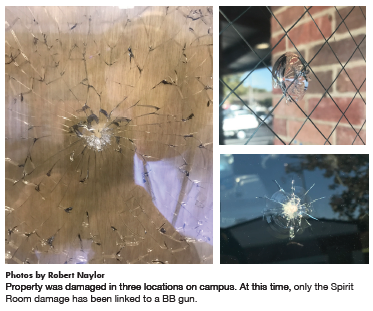 On Oct. 21 a window in the Apache Spirit Room at the Rogers Student Center was shot at with a BB gun.

After investigation, police said a suspect was tentatively identified by nickname on Oct. 24, with his full identity confirmed on Oct. 29.

The investigation revealed the window shot out by a BB gun was broken unintentionally, according to Rebecca Sanders, director of public affairs and media relations at TJC.

Although the BB gun caused damage to tempered glass, in this circumstance campus police deemed that it could not cause harm to those on campus, which is why a campus Apache Alert notification was not sent out.

“The Apache Alert system is for incidents that are immediate or ongoing threats to campus,” said Police Chief Michael Seale.

The Student Handbook and the Residential Life handbook have strict no tolerance policies in regards to a long list of weapons that are not allowed on campus. This list includes BB guns. The possession of such an item leads to immediate eviction from campus housing.

The Drumbeat was unable to confirm the student’s current housing situation, as the Family Educational Rights and Privacy Act protects student disciplinary actions.

Currently, there is no evidence of the property damaged at the Spirit Room, the TJC campus vehicle and Baldwin Construction and Facilities Building being linked. At this time, only the Spirit Room was confirmed to have been damaged by a BB gun.

According to police report 20190609, which specifically covers the damaged property at the Baldwin Construction and Facilities Building, campus police was not aware of the incident until The DrumBeat requested the information. The information currently states that an unknown object struck the window at an unknown date and time.

The suspect’s name has