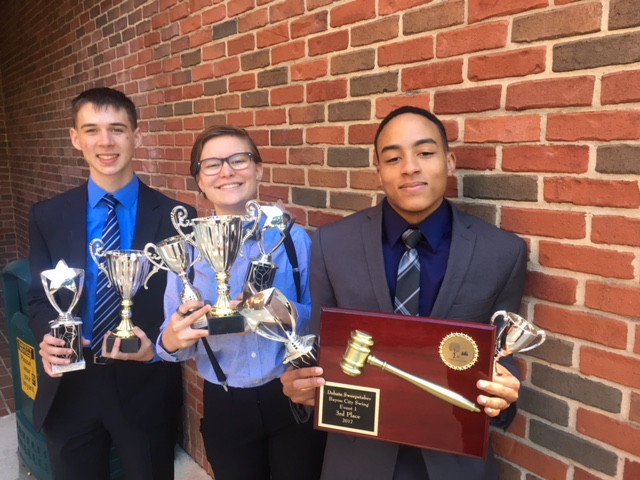 Anna Graves
News Editor
In just this past month, the TJC speech and debate team have been bringing home awards.
They have brought home many awards and trophies from their hard work beating out major universities across the state..
The team participated in the Bayou Swing Tournament in Houston on Oct. 20-22, where there were multiple styles of speech and debate events.
Director of the TJC Speech and debate team, M’Liss Hindman reports that the team averages one tournament per month. And if they can handle it financially, they will compete twice in one month.
Both team captains, Alex Dickson and Aaron Kelley, got to compete for the first time this semester. They went undefeated in Parliamentary Debate winning first place against schools like Tulane University, Texas State, and A&M.
Nick White, who is a freshman competed for the first time in a tournament. He made it to the semi-finals in the international public debate association debate and finished as top speaker overall in that event, along with Dickson.
A more recent tournament took place on Nov. 3-5 in Corpus Christi for the Texas Intercollegiate Forensics Association (TIFA).
On Nov. 6, Kelley says that the team arrived back home from the Corpus Christi tournament at 3 a.m. that morning.
“TJC did exceptionally well at this last tournament. We took second place sweepstakes…” Said Aaron Kelley.
In the dramatic interpretation event, which is an acting event, TJC took the top three spots. Once again, both debate teams went undefeated in preliminary rounds.
Dickson and Kelley joined the team last fall as debate partners. This is their first semester as sophomore captains. Both students are competing and leading the team that is much bigger than the team they had last year.
Kelley says there is a lot more coming from the TJC Speech and Debate team.
“…Myself and the other captain, Alex Dickson, are very excited to see what this team’s gonna do, what success that they are gonna be able to achieve, and how much their gonna grow over this next year,” said Kelley.
The team’s next tournament is the TCCFA which will be held on the first weekend in December of this year.