Where is the school mascot? 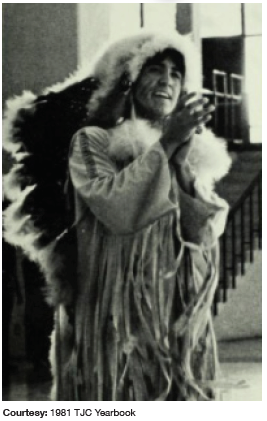 How TJC became known as the Apaches

While in attendance at a TJC sporting event, it becomes strangely apparent that the school lacks a mascot. Why is that? The answer to that question has been the topic of debate ever since Tyler Junior College established itself as the Apaches in 1927.

“I don’t think there is anything written anywhere about a mascot here at TJC,” said Tim Drain, assistant vice president of athletics and student life. “I was the assistant athletic director for three years, and the athletic director for 16. So, a total athletic administration for 19 years. In those 19 years, I cannot recall a single meeting with a person saying ‘I want to be the mascot, what do I have to do?’”

Alumni perhaps have had encounters with an Apache cheerleader, as highlighted in the 1981 TJC yearbook, but this tradition has long since died. While a written rule has never been established, word of mouth has long since discussed the issue.

The fear of cultural appropriation is a worry that TJC has evaded for many years. The necessity for having a mascot is also overshadowed by several organizations that exist in a mascot’s stead.

“It’s strange not having a mascot, but we’re very blessed with the Apache Band, Apache Bells, Apache Cheerleaders,” Drain said. “I’m not sure whether the market is there, and if we truly ever needed one.”

While students have been seen wearing headdresses, feathers, perhaps even a full Apache garb to dress up for an event like homecoming, this is technically allowed. Although being a possible point of contention after the fact, if Student Life at TJC allows for such outfitting to occur, nothing currently exists to stop it.

“I was here from ’72 to ’74,” said Marian Jackson, director of the Learning Resource Center. “I think it was right before or right after that was when they actually had someone with Apache heritage.”

Prior to TJC becoming the Apaches, the school college nickname was unofficially known as the Buccaneers. In an excerpt from an original staff member of student media Sarah McClendon wrote about a mass meeting to change the school’s symbolic name for the college in the 1928 edition of “The Alcalde.”

“The champions of the Buccaneers were just as sure that their name should be selected, since it was the one used unofficially in 1927, as the supporters of Indian names were that fierce ‘land-lubbers’ would be more fitting than cruel ‘sea-faring dogs.’ Well, the Apaches finally won; and the ‘bucks,’ though defeated, pledged their support with loud war-whoops and the waving of tomahawks to the wildest tribe of Indians on our early frontier.”