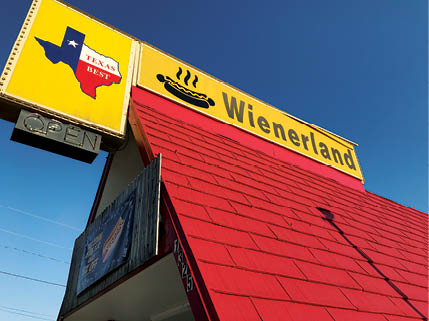 A Tyler staple has made its long-awaited return. Wienerland, located directly across from TJC on Fifth Street re-opened their doors in May following a change in ownership.

The previous owners, David and Mary Pessink passed away within three days of each other, both at the age of 61. Two Tyler couples have come together to buy the business and take over the operations. The couples, Michael and Lindsey Harrison and John and Ashley Feldman were frequent customers of the restaurant when the previous owners died.

“I thought maybe the family would take it over. I wasn’t quite sure, but we did a bunch of research when we found out it had closed and we realized it was open for lease,” said Mrs. Harrison in an April interview with The DrumBeat.

Now that the restaurant has been open for about four months, we caught back up with Mrs. Harrison and the modernized Wienerland.

“The community has been so supportive, it’s been awesome. Of course summer comes and TJC is not as full, so it was steady. But as soon as August rolled around and TJC got back in the swing of things we picked right back up,” said Mrs. Harrison.

Since the beginning of the semester, students have flocked to the nearby restaurant.

“It’s so nice to see people walking across the walkway to come over here and get a snow cone, get lunch, come over here for dinner,” said Mrs. Harrison. “It has been really, really great. It’s definitely picked up. We definitely know when school is in session.

With the re-opening of Wienerland, and new owners, a new menu has joined. New dogs, as well as classic dogs return as dining options.

“We’ve got some old favorites, the cowboy, the Tex-Mex, we got the chili cheese dog, just a plain jane hot dog,” said Mrs. Harrison. “We’ve also got some new items as well. One of our favorite menu items is called the Morning Glory. That is a hot dog with a fried egg, melted cheese, and bacon on it. It is divine.”

Other fan favorites are the dog bowl. It contains a hotdog, French fries, coleslaw, chili, cheese, jalapenos and anything other add-ons the customer wants to include.

“We do a 10% discount off the whole order or we just started a TJC combo meal. It is a chili cheese dog with a bag of chips and a small drink for six dollars,” said Mrs. Harrison.

Even with a big return, there were some negative reviews from customers who ate at the establishment before the initial closing.

“It was rough for a while. I think people were expecting it to be the same and we just couldn’t do that. We tried to keep as much as we could the same, but it is really hard when the family previously had this they’ve really stepped away it,” said Mrs. Harrison. “ We had to go out on our own and do our own thing.”

Despite the little negative feedback, the new owners have plans and see a great future for Wienerland.

“We have got our food trailer, The Wiener Wagon, so that’s fun. So we hope to get that more around town and of course we would like to open up more locations,” said Mrs. Harrison.

Wienerland is located across from the White Administration Building at the intersection of Fifth Street and Baxter. The restaurant  is open Monday through Saturday from 11 a.m. to 9 p.m. each day.