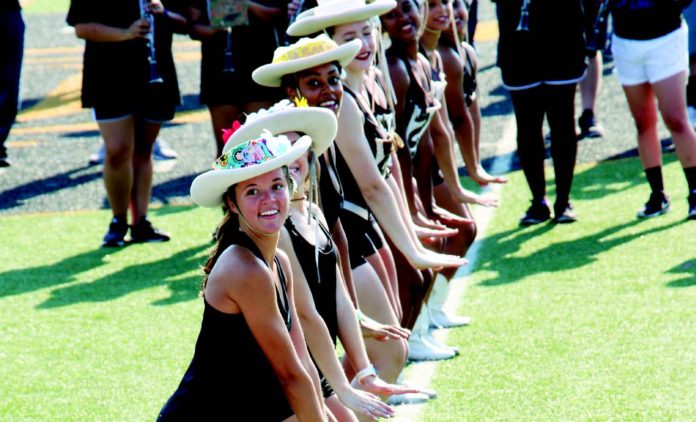 The Apache Belles are celebrating seventy years of glitz, glamour and school spirit. Since 1947 the the rich and diverse history of the belles remains a legacy. They have performed for super bowls, presidents, military troops, parades and have traveled across the United States, and the world.

Before the Dallas Cowboys Cheerleaders were formed, the Apache Belles were the performers affiliated with the franchise and appeared on national television many times throughout the year.

Moving back to the present, the Belles continue to put on stunning shows. They train hard for long hours each day and have a genuine prayer and devotional time before each practice.

Director of the Apache Belles, Jasilyn Schaefer describes the girls as “hard working, diligent and intelligent. They pay attention to detail, respectful, loyal, love tradition and just has an incredible amount of respect for the ladies that have gone before her in this organization.”

As a former Apache Belle herself, Schaefer explains how training and expectations have changed for the Belles in the past several years.

“I think with the popularity of dance shows on TV, the level of technical ability and acrobatic ability has risen dramatically. These girls have to be able to throw aerials, do triple pirouettes into turning disk and land in the splits. I think when we were here it was required that we be able to hit our hat when we kicked, do the splits and maybe do a toe touch. The physical demand on them is much more rigorous… We have to step up our game in training and conditioning and making sure our athletes stay strong.”

The same day of their first home game performance of the year, the Belles hosted a Belle Babes workshop as a fundraiser for their travel travel account.

On behalf of TJC and in celebration of their anniversary, they plan to travel to Costa Rica. The trip will be for outreach purposes as well as the opportunity for the girls to perform at a national soccer game and local schools.

Along with their travel plans, Both the Belles and Band, sharing the same anniversary,  will be joining together for a champaign reception in conjunction with the alumni awards dinner on the Friday prior to homecoming.

The Apache Belles continue to stay strong after seventy years of memorable performances proving they were, and still are the elite.