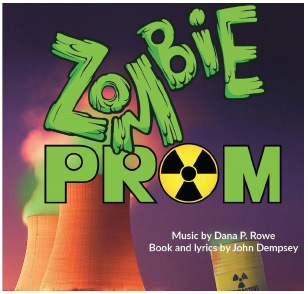 The Tyler Junior College theatre department is putting on the campy musical debut of “Zombie Prom.”

“It is a comedic musical set in the ’50s,” said Jacob Davis, a professor of Theatre. “It makes fun of the time period and how people operated and is meant as a satire.”

Davis said “it’s a story about a teenage boy who had a break up and decides to run away. He ends up falling in a nuclear plant, turning into a zombie, and the rest of the show he’s trying to make it to the prom.”

Davis added there is an obvious social satire underneath the plays comedic exterior. “Art always reflects life,” Davis said, “Even though we went through desegregation during that time, it’s still in effect today and there are still tensions today.”

Davis commented that a comedy can still make people have conversations about deep subject matter. “Even though we’re having fun, it’s still conversations people need to have about acceptance of other people.”

As far as the making of the play, Davis said the department had fun with this one because of its light-hearted nature. “We all have fun doing what we do, even on the serious plays,” said Davis, “but there was a lot less weight to it. It is not a cumbersome as far as going through rehearsals.”

The theatre department will be performing the play at 7:30 Nov. 20-23 at the Jean Brown Theatre. On Nov. 23, however, they will have an additional play at 2:30. Students can bring their ID for free admission.