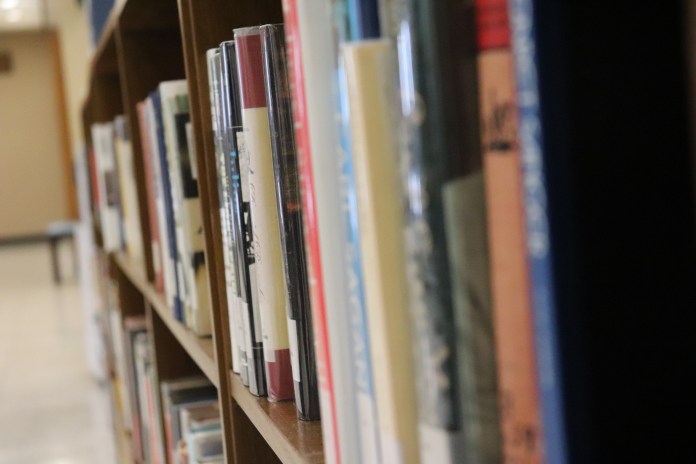 What do “The Shining,” “Slaughterhouse-Five” and “Adventures of Huckleberry Finn” have in common? All are some of the most banned books in the country, according to writershouse.com.

While banning books may seem like a thing of the past, it’s not. Books are being banned just the same as years before. Libraries across the U.S. are pulling books off their shelves. Texas is the leader for most books banned according to a study by PEN America, a nonprofit organization focused on freedom of speech and information.

One reminder for how far we haven’t come is Banned Book Week, a weeklong event where libraries encourage readers to look into why certain books are challenged and discuss the most banned books of the year and why.

“Banned Book Week is essentially a celebration of the freedom of information,” Nittmo said.

During Banned Book Week, librarians around the country put together displays and coordinate events surrounding the titles and reasons books are banned across the country. Basically, these librarians want to remind patrons that just because these books are available to checkout at their library, doesn’t mean everyone has access to every title in libraries across the country.

In order to ban a book, a patron must bring attention to the issue to the librarian by first challenging the book. After a book is challenged, the library must go through an internal check, depending on their procedure, to make sure the book does follow their mission statement and audience, or if not, they remove the book from the shelves.

According to bannedbooksweek.org, half of the top 10 most challenged books were challenged due to LGBTQIA+ content, and due to this challenge, they were banned in some libraries across the country.

While some people may think banned books are only the worst of the worst, think sexually explicit content, often times banned books are banned due to their author’s racial background, and message surrounding race, such as in “The Hate U Give.”

“The Hate U Give” follows Starr, an African American girl who witnesses police violence against her friend and gets caught up in the media frenzy following that event. The book also deals with the idea of death and justice, especially in a public death.

The author, Angie Thomas, wrote the book following the death of Oscar Grant in 2009, who died after being shot by a police officer.

“At the time I remember wondering what would happen if that took place in my neighborhood,” Angie Thomas said in an interview with Walker Books.

The book looks through Starr’s eyes as she tries to find the reasoning behind the death of a friend, and as she finds the power to speak up and try to make a difference in her community.

“I wanted to find a way to find hope,” Thomas said. “I wanted to show the human side of these cases, as well.”

This book, a call for humanity and togetherness amid tragedy, was also the fifth most challenged book of 2021. According to bannedbookweek.org, the book was challenged due to “profanity and violence and because it was thought to promote an anti-police message and indoctrination of a social agenda.”

“The Hate U Give” is wildly important for young adults in understanding how they can function and make a difference in the world. But instead of seeing that, challengers have seen this book only as an anti-police message. The problem with banning books is those who challenge books don’t see, or maybe refuse to see, the good it can do for a community hurting.

After the surge of the Black Lives Matter movement in June and July 2020, “The Hate U Give” grew in popularity. It seemed to be a way for people to connect and understand their own experiences. It also was a way for non-Black people to see and fully understand the people behind the news story.

I actually agree with those who challenged that book in particular. I too wish “The Hate U Give” had never been written. I wish we were at a point in our country where the circumstances leading up to the book had never happened. I wish this message wasn’t as relatable, where it didn’t hit as close to home. But unfortunately, it does. Unfortunately, there are children who don’t come home every night, and banning books about it won’t make that stop, it’ll only isolate those who need to have their story told in order to move on.

Businesses: Is it passion or money that motivates us?